Hi there, I am wanting to use an Arduino Mega to dim a commercial LED light fixture for my fish tank. I found a project that has already done this and the person provided their code and a wiring guide. However his guide seems to be built on the assumption that you are using a constant current driver with a PWM input, which is not the case for me (I think). I have traced out what I believe to be the schematic and at the bottom of this post will be a picture of the fixture's PCB:

I have been doing some reading on how to do this and I have some questions that I was hoping that I could get help with.

Thank you all for your time. 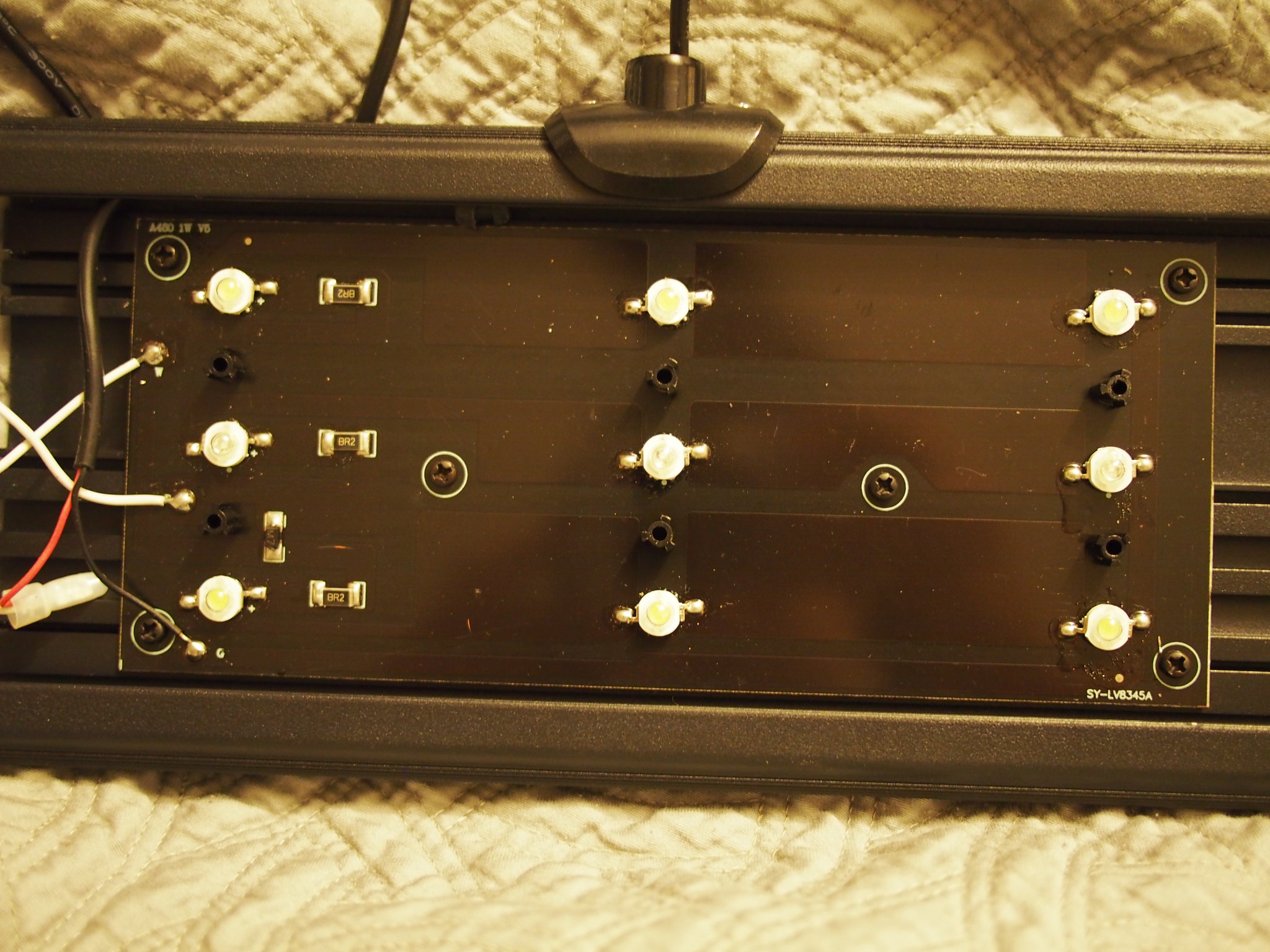 1tominator: 1. Since this is what I believe to be a constant voltage led array, can I just control it with the PWM outputs of the Arduino using an N-Chanel MOSFET placed between the LED array and Ground?

Well, "constant voltage" it really isn't; it is based on the resistors controlling the current to the series LEDs but that is markedly dependent on the input voltage - you do need to have a regulated supply. So a series control FET will work fine.

Connect the supply to both sides of the switch to remove the diode drop.

1tominator: 2. If this is true what should I look for in a MOSFET? Anything besides it being a logic level and being able to handle the voltage and current (in the case of this array it is 9 1w LEDs at 12v driven by a 12v 1a power supply.

That pretty well sums it up.

1tominator: 3. I see lost of different opinions about whether the MOSFET should have a gate driver between it and the PWM output of the Arduino to help the MOSFET switch faster and isolate the Arduino from the gate capacitance. Other people seem to think a driver is only really needed if you are driving something at higher frequencies. Is the inclusion of a gate driver necessary or beneficial for this application? Does the fact that it will be used with PWM instead of being switched on or off occasionally lean towards the inclusion of a driver? Does the fact that this MOSFET will be running long term (likely 12 hours/day 7 days a week) instead of occasionally make the inclusion of a driver more appropriate?

As long as you use a genuine logic level FET with a 220 Ohm resistor in series with the Arduino output it should work fine at the relatively low PWM frequency of the Arduino. How will you know? The FET should run cool at ¾ power.

Thank you for your reply. This helps me out a lot.