Show us your arduino electronic work area, no matter how humble or grand.

Hi, I have just spent my work Christmas Bonus to make my idea of a decent work bench area to get things done, after working off an old kitchen table and makeshift shelf to put test gear on, down the back of my garage.
Here is my new work area, show us your humble or grand work space that all these arduino and other electronic masterpieces are born.

Hi, I have got the new workbench top finished, well 90%, there will always be something to add.
Its made of lengths of 1200mm long 19mm thick pine board.
I tried to do as little timber cutting as possible, so the shelve frame is 1200mm wide and 1200mm plus 2x19mm high.
I only had to cut the three shelves that fit inside the frame, taking 38mm off their length.
The bottom shelf with the CRO and power supply, is actually two pieces, one that fits in the frame and a narrow piece that is glued and screwed with tags to the deeper one. This makes this shelf deeper for the instruments. (If you look at the picture, near the roll of red tape you can see one of the tags.)
Under this shelf I have made a light box, a piece of timber across the front acts as a shade and support for the LED array that shines down. This box, painted white, will be for containers for holding bits and pieces as well as tools while working on a project, I have a portable tool cabinet to store and lock-up my tools.
In-front of the base of the frame I lashed out and bought a piece of 19mm melamine laminated board to be the main work area.
To keep the frame rigid the back of the light box is a sheet of 12mm particle board glued and screwed to the base and up the two sides.
Higher up each of the narrower shelves has a length of the same shelving material behind it to strengthen and provide a back to it.
Assembled it can be carried by two people.
My next job is to fit brackets on the side for glue gun, heat gun, drills and fit a 4way power board to the timber shade, and also the row of terminals for DC power from the power supply.

(CAUTION: Not all timber in a rack is 1200mm, I had pre warning from a relatives mate who works there, spent quite a bit of time matching 1200mm lengths. In the long term worth the effort.)

Before this my home workbench was an old kitchen table and a wooden shelf made of bricks and plank to hold test equipment, that was okay because I could use my employers workshop if anything got serious.
It used to be ½ a block away, now its 15min drive when he bought a factory shed.
So out of necessity!!!!
Whether the results of my work will improve or become more inspiring will only tell with time.
The overall height on the table is just right for a duck diseased guy like me,(bum to close to the ground) 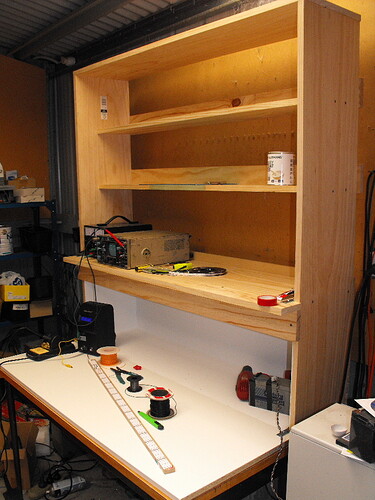 DSCF1006rs.JPG720×960 313 KB
Now let us see where you work, slave, succeed and play with electronics, from pictures posted of some projects the creation environment is pretty minimal in some cases.
So be proud forum members, show us where you do your worst, best in this activity striving for excellence. 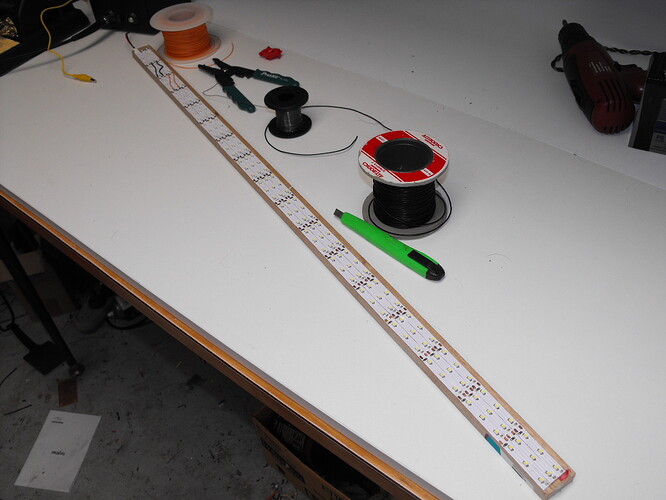 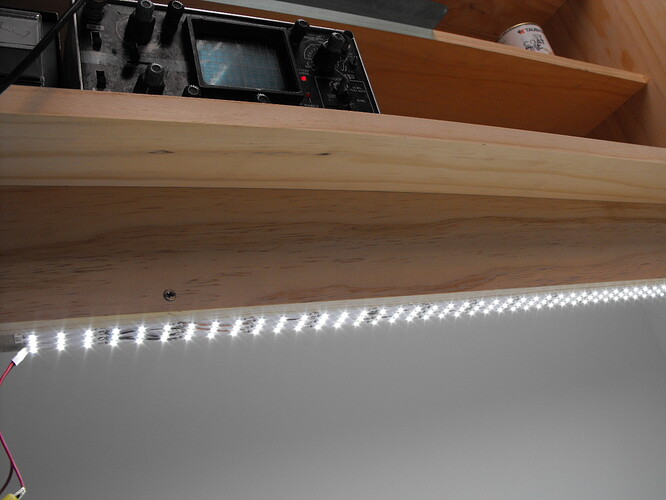 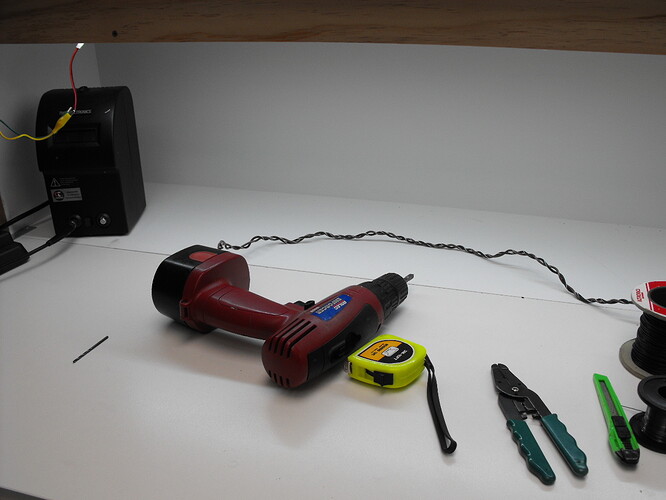 Haha! Love it! I'm so glad you took the bait on this idea. I'm in the planning stages to overhaul my workroom, so I'm going to shamelessly rob ideas from this thread. Keep 'em coming. 8)

Hi, feel free, most of stuff I've done so far has been trouble free productions, SO FAR.

Nice.
How do like those LED strips ?
Do you see a lot of light sources (so also a lot of different shades at your project which might bother you) ?
If so, consider indirect lighting.
Have the LEDs send their light towards the white wall and have that reflect it/

Hi MAS3 ,yes I thought about that, because they are elcheapo ebay strips.
The way they are mounted I'm not looking directly at them, and there appears to be enough reflection from the back of the box to minimize any spotlighting.
The LED itself appears to have a wide transmitting angle so coverage looks good.
I'm on the lookout for an old panto-graph type overhead lamp that I can convert to LED to bolt to the side for the shelves.
Off to local trash and treasure market this weekend to see what I can find.
That strip which is three rows consumes 1A at 12Vdc.

Tom I’m glad to see that you put in some quality Duinotime over the break. Your new work space is looking good. I have posted this pic of my humble work area before but hey I’m into recycling
Pedro 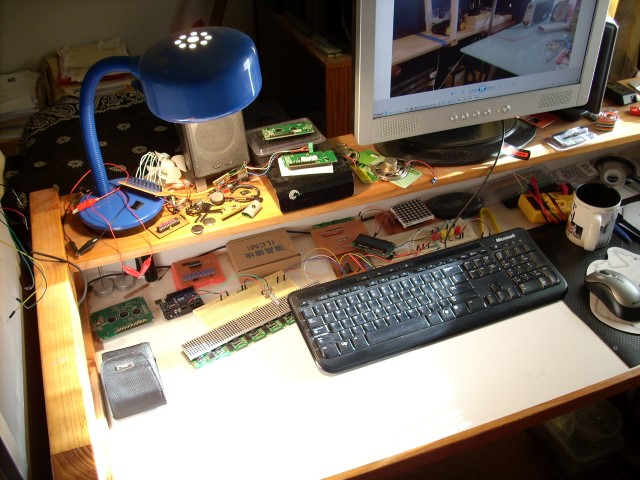 As I've been living in a motorhome for 13 years I don't have a lot of room. Here is a pic of my "workbench" from a couple of years ago, it's a BBQ set box that's been stripped of most of the holders for the BBQ tools.

This normally sits on my 1x1=foot slide out table that you can just see in the background with yellow-handled cutters on it. And it packs away above the laptop (far right) for driving.

This is from 2BA (2 years Before Arduino), note the STK500 dev board I'm using to program my ATmega644-based truck speedo. One of the small chips on the breadboard is an ATtiny85 that's generating pulses so I can test the speedo.

That was then, and this is now.

We've pretty much dropped anchor on our land in central Queensland and I have two shipping containers. One for tools, .5 for junk, and .5 is going to be a workshop. I've already built the benches but need to add shelves and a front door etc.

No pics of that yet but I plan to get a good new CRO (do you non-Aussies know what a CRO is?) bench PSU etc. I may even spash out and get a new PC with triple screens, luxury I suppose but great for CAD work.

My workroom is currently stripped down to the studs. Been at it for almost two months now; never underestimate the surprises you can find in the walls of a 113yr old home.

Hi Pedro, good stuff, your pic has reminded met to make a holder for the coffee mug, preferably away from soldering station.
Graynomad, love the case method, I have similar arrangement with amateur radio gear, all in a case so I can move from car to car.
Shipping containers, now there's an idea, instead of trying to clean out shed or garage, just buy a container. hmmm.
Chagrin, underconstruction, I could imagine in a 113yr old house, found anything interesting under the lino?
Thanks guys, looking good.
Tom..... 8) (36DegC here today, it rained, dropped to 32 then jumped back to 34 now.)

CRO. you're showing your age there Rob 8)

He he, Tom used it as well. Not many cathode rays in scopes theses days eh, but I still tend to use the term.

It's amazing what you can buy now for $500 or less, better than our old Tektronics 465s that even our company was hard pressed to afford.

Hi Rob.
If you look in my first pic, on the shelf is a Lab Supply and a CRO, its portable, bought it back in 1985, has nicads in it, or will run from 11 to 30V DC, or 240/120AC.
It has bounced around in the back of a Ford Falcon Station Wagon for over 1 Million kms. Only problem, bolts fell out of power transformer brackets and transformer swung around inside chassis on its leads.
Still works, only 6Mhz but was all I needed at the time.
Hidden under bench is 4ch, 100Mhz CRO, which fits nicely on shelf as well.

Graynomad:
I plan to get a good new CRO (do you non-Aussies know what a CRO is?)

Yes! But only because I watch that crazy Aussie bloke, Dave Jones... XD

BTW, I dare you to try and board an airplane with that case!

I dare you to try and board an airplane with that case!

A highly unlikely scenario, mostly because I can't afford to fly anywhere

Here is one of the containers workshops. 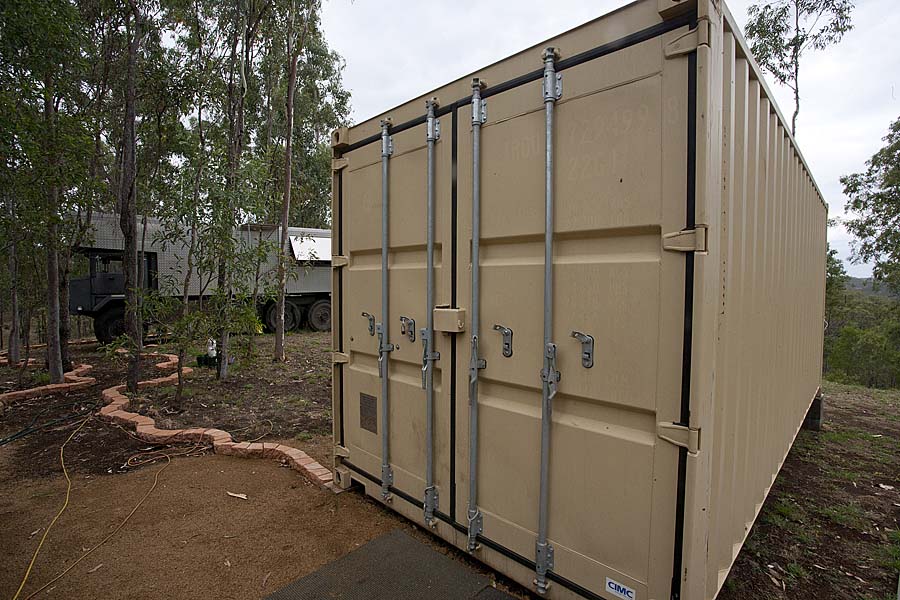 That's our motorhome in the background, this has all been landscaped since, it looks a lot nicer now.

WOW, now that's the way to make sure nobody fools with your project, security plus.
The container looks in real good nick too, usually the ones around here that they sell look like they have been to the bottom of the pacific at least 3 times.
Tom.....

That container is what they call a "new build", which means it's only done a single trip from China (presumably) to Oz. They cost more but are essentially brand new so worth it I think. That said we got this one for almost the same price ($3500) as a banged up container like the other one we have.

As we are often away security is an issue, but of course anybody with a grinder can get into a container in no time at all.

Graynomad:
That container is what they call a "new build", which means it's only done a single trip from China (presumably) to Oz. They cost more but are essentially brand new so worth it I think. That said we got this one for almost the same price ($3500) as a banged up container like the other one we have.

As we are often away security is an issue, but of course anybody with a grinder can get into a container in no time at all.

Have you considered burying them? Lots of people use these things as underground bunkers. It would be a lot more secure, temperature controlled, and generally not that expensive.

Not really, firstly it would not be convenient in our situation because having them at the current level is about right for other stuff. For example we plan to add a roof so the space between them is weather proof(ish). When done it will be quite a nice little protected area, if they were underground we would not get that.

So in our situation having them under ground doesn't suit, but there are other issues.

It would probably cost as much as again as the containers to dig the holes, and as much yet again to waterproof them and properly drain behind them. And at the end of the day they are no more secure because you still have to have the doors accessible. So all in all putting them underground is a major project, above ground is 2 hours work with a jack, 10 breeze blocks and $20

They would however be a LOT cooler, that would be nice.

And finally, the last nail in the idea's coffin, some wallabies have pretty much claimed the underneath of one container as there own and they spend a large part of the day relaxing there, I wouldn't have the heart to evict them

Hi Rob, I'd agree putting a roof over them with a gap would help with heat and cooling. In the bush around here I keep a guys remote power system going and he lived on a 2 bedroom shack for quite a while.
He came into a bit of money and built his garage/workshop over the renovated shack.
He recons its the best thing he ever did, the huge layer of quiet air around the house provided a huge amount of insulation.