I am in need of a small portable device that can transmit an USB data signal from a Mini-B USB connection.

I found thoose during my search: APC220-Wireless-Communication-Module-for-Arduino-USB-Converter-New but I guess they still need an Arduino to tell them to send and receive the USB singal.

Whats the smallest Arduino that could do the task? Would the program be complicated? Can it run long enough on 2 or 3 AAA batterys?

There are many ways to send data wirelessly, and you've chosen one of the most difficult approaches. Rather than tell us your solution, describe the problem you want to solve. Then you will more likely receive useful suggestions.

That device does not transmit a USB data signal. It transmits the data that is being sent over USB - which is probably what you actually want.

It looks like there is an adapter which would allow the wireless to plug directly into a USB socket on a PC. I presume it appears as a Serial port on the PC.

You would not need the adapter with an Arduino.

@jremington posted while I was writing. I haven't read the datasheet so I don't know why he says these units are difficult to use.

I did not say "these units are difficult to use". Rather, I was addressing the concept of sending data via "wireless USB". If anyone has experience with a device that provides a reliable wireless USB connection, please chime in. 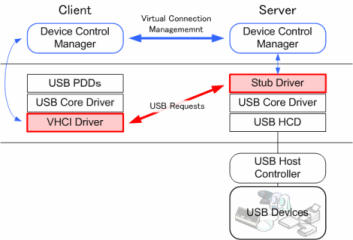 Any suggestion about how to create a wirelessly USB port with YUN?

Your best bet is Arduino Tre or Pi.

I just need a way to transmit those signals wireless with two small, lightweight and battery powered devices. They would attach to the camera and the remote.

So far I haven't found any easy solution for this problem.

If someone has not already done so, you would have to start by examining the actual signals being sent on the USB cable by the remote. It is conceivable that the signal is a simple switch closure, in which case it be rather simple to come up with a wireless remote.

For example, battery chargers designed for Apple cell phones and MP3 players use fixed voltage levels on the USB data lines to signal a connection.

jremington:
... the signal is a simple switch closure...

The signal is more complex than that and the camera also "talks back" to the remote.

Can you post a datasheet for these devices?
Is this a wireless remote control?
Do you know how it actually works? - for example is it "pretending" to be a Serial connection?
Do you know what data is transmitted?

Is it an option to put the remote near the camera and use an Arduino to work the remote on the basis of data that it receives by wireless? That way you would not need to know anything about the communication between the remote and the camera.

If what the OP is after is a wireless USB extender, which is / was a device to allow 2 USB devices to communicate via wireless, they are extremely difficult to build and it used to be possible to buy them, but they were expensive
primarily due to the hi data rate radios needed.
I havnt seen such devices for sale now for a long time.

The point Robin2 is making is that whilst the connectors may be USB and whilst it may even be using the camera USB connector, it is not necessarily USB. For one thing, one would have to be the USB Host. Which? Is the camera port a USB OTG?

What does the remote appear as when plugged into a PC?

I dont think the camera is hosting, if I connect my phone I need an extra OTG cable.

The remote on PC does nothing, only if I set it to "firmware update" mode before connecting.

So maybe the remote is hosting or its not an USB signal. I dont know.

gumpf:
The remote on PC does nothing, only if I set it to "firmware update" mode before connecting.

I'm not familiar with "firmware update" mode but it sounds like it is intended to recognize strange USB devices - if so, then the remote must be a "proper" USB device of some sort. On linux I would use the command lsusb to get a list of connected USB devices.

In any case, unless you know exactly how the remote and the camera work together you haven't a hope of making something to intervene between them.

It just occurs to me that you have not actually told us how the remote and camera are actually used? Does the remote plug into the camera? if so how can it be called a "remote".

And you have not posted a link to the datasheet either.

Well I can't find any data sheets, companies don't really spread them around. And there are such things as cable remotes.

You just press 2 buttons on the remote while turning it on, then it enters update mode and can be recognized by the PC. If you dont it wont show up.

I found this interesting device:
http://www.dslrfilmnoob.com/2014/01/11/tp-link-tl-mr3040-wireless-dslr-monitor-demo/

Of course this only allows to connect via WiFi while I need to be able to plugin my cable remote on the non camera end.

Guess I was wrong in thinking "That USB connector has just 2 data pins, how hard can it be to bridge that wirelessly"

Found some info about the camera interface: http://www.circuitsathome.com/canon-eos-cameras-principles-of-interfacing-and-library-description

Just think of the camera and the remote control device.

How, exactly do you use them?

I would be very surprised if there is not an online version of the camera operating manual.
Did the remote control device come with the camera?

I have no idea why you care about the manuals. Manufacturers usually don't put in details about how their data transfer protocols work.

Picture Transfer Protocol (PTP) is a protocol developed by the International Imaging Industry Association to allow the transfer of images from digital cameras to computers and other peripheral devices without the need of additional device drivers. The protocol has been standardized as ISO 15740. It is further standardized for USB by the USB Implementers Forum as the still image capture device class. USB is the default network transport media for PTP devices. USB PTP is a common alternative to t...

gumpf:
I have no idea why you care about the manuals.

Because, in spite of at least 2 requests, you refuse to tell me how the standard system is intended to work.

And... now that I have been able to read the remote control manual things are a lot clearer.

First thing (which I don't think was mentoned earlier) is that it is a wired remote to allow control of many camera features including focusing. That means it will have a complex interface with the camera, and probably a bi-directional one.

Second thing, as you suggested, the Canon manual does not seem to explain the capabilities of the USB port at all.

Third thing. The people who made the remote control must have been able to find out how the USB interface works. How did they do that? Can you find a source for that info?

If it was my equipment I think I would try to get the remote control recognized by my PC and see if it can be accessed as a serial connection using a terminal such as puTTY. If you are lucky the remote will send recognizable messages to the PC. If the messages can be detected but are not human readable you would need to write a PC program to decipher them.

If, following all that, you can make sense of the messages from the remote and feel able to replicate them with a PC program you could try writing that program (on your PC, to start with) and connecting the PC directly to the camera in place of the remote control to see if it can work. You may need to gather the camera responses so you can improve your PC program.

Or you could consider my earlier suggestion of using an Arduino to operate your remote while the remote is plugged into the camera.