Solved 10k potentiometer not fitting in the breadboard 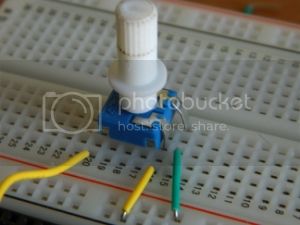 And I placed it rotated by 90° counterclockwise. Since now the potentiometer occupies only 3 columns i had enough space to connect the wires without problems, and now i don't have to push down it anymore. It just works fine, as it should be. Try it yourself, I'd like to know if the problem is only mine. I hope I've helped someone getting stuck with my same problem ;). Did something wrong? Is the problem only mine? Or you've experienced the same thing? Any better solution?
I've found someone in this section with the same problem: COMPLAINT: Starter kit components not fitting - The Arduino Starter Kit - Arduino Forum
Let me know!
Bye,
SimoDK

You're a GENIUS!
Thank you very much for this optimal solution!

Awesome suggestion thanks. Was struggling with the beginner examples to get my serial to print anyhting outside of 200 - 300 until following this. The examples could do with better images.

Thanks for the picture, that was helpful. I had the same problem, and a quick search on the internet brought me here.

It also got me looking at the breadboard, and I noticed the all the metal slots in the middle 2 rows are horizontal, and the outside rows (+ and -) are vertical. Wonder why that is...

I am also having the same problem, the pots that came with my kit don't even fit the bread board inserting north to south only east to west like in your picture. I am going to try your fix right now. Thank You.

I tried bending the leads on the pot, but it just didn't fit the breadboard very well. It would keep coming loose, so I soldered some homemade leads onto one of them and it fits perfectly. I will post a picture as soon as I can figure out how to shrink it. Fixed photo on my phone here it is. 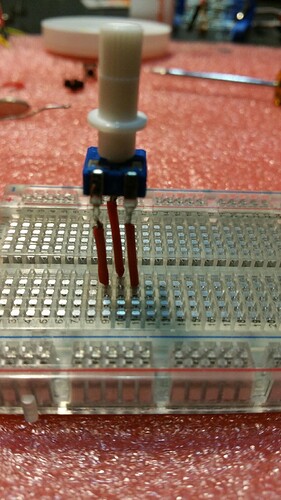 The following configuration worked pretty fine for me: 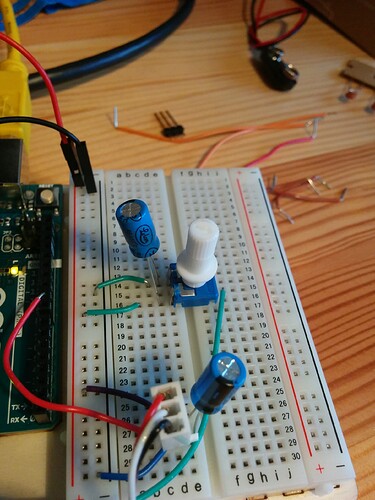 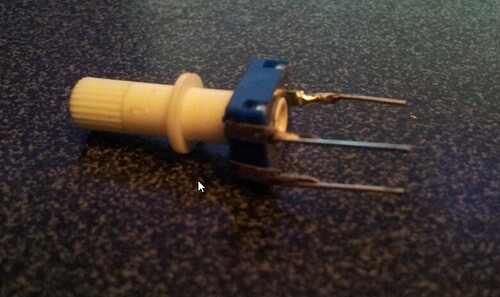 Awesome, I see many of you managed to get rid of this problem using a solder, which I'm not very fond of so I completely ignored that option

. I'm glad it (and we!) helped someone, and it's been nice to see I'm not the only one.. I felt kinda stupid because of this thing

whiletrue:
The following configuration worked pretty fine for me:

What have you done there? I could't make it that stiff, it kept jumping off as I said.. Have you just bent the legs?

whiletrue:
The following configuration worked pretty fine for me:

but the thins aren't connected fully. Where does the green wire go?

I created an account just to say "Thank you!"
This works great.

Just an FYI, there's no reason why your potentiometer can't cross the middle of your breadboard.

Provide power from one side, read data from the other.

Then I tried placing it between the two sections of the breadboard, so I had space to wire the central pin in the right side and the two extarnal in the left one, but now the central pin kept jumping off.

I don't know if the kits they sell now are better, but the pots that came with mine are really unstable if you try to do so

Thank you a lot!

We had the same connection problem.

Sweet potato fries! you are a lifesaver!!!

Works a treat, thanks for sharing!

I come from the future to thank this kind person.

Also, wtf doesn't the Arduino Team correct this in the book?

Thank you a lot for this! It really helped me after trying to connect it across both sides of the breadboard. Maybe you can post the same picture again but without the photobucket overlay? It was a bit hard to see in the beginning because the photobucket overlay covered exactly the bended pin that you described. But again, thanks a lot!