I've been messing around with the yun for around a month now so I'm by no means an expert with it. However, my current project requires solar power since the yun will be in a remote area. I have an ASC solar voltage regulator which takes ~14v from my Aleko solar panel and charges a 36Ah battery. From the battery I have a 5v Buck converter I got from adafruit that feeds 5v to an Arduino. The catch is, when I connect the 5v to my Vin pin, nothing happens. I've got a good ground and I've verified the voltage from the converter. Is there something I'm missing? Also I've verified this issue on another yun and same results. Any help is greatly appreciated.

So I've taken pictures in hopes that ANYONE will be able to steer me in the right direction with this. I'm at my wits end because I can't understand why this won't work.

This is the wiring on the breadboard: the red on left is 12VIN, middle is ground from battery and to arduino, and the red wire on right is 5Vout. For the Yun, the 5Vout from regulator is going to VIN pin and ground is to ground. 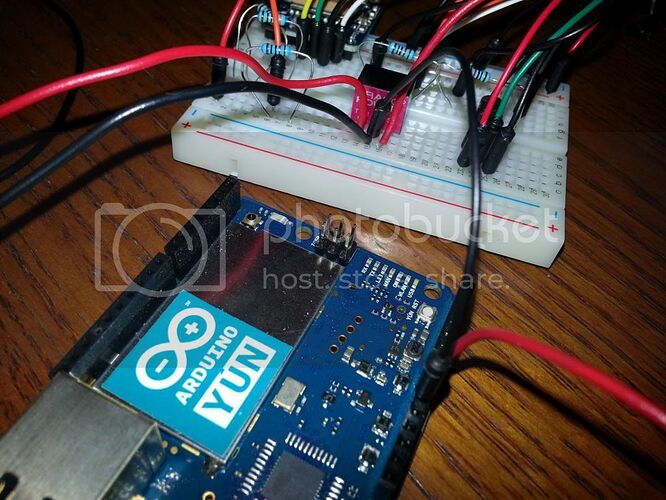 This is the 5Vout from the regulator: 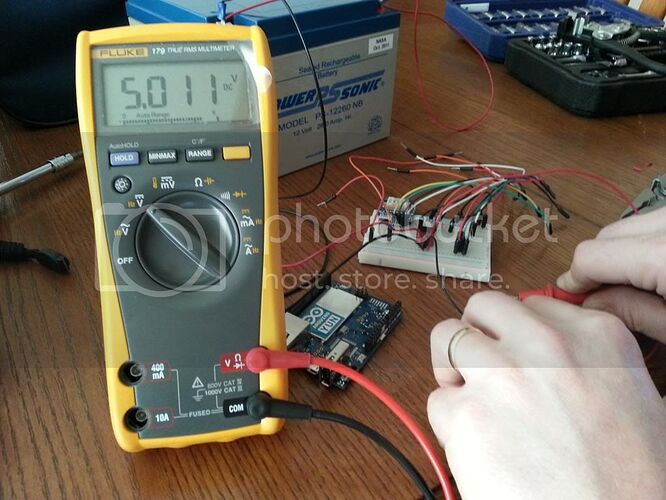 As usual, any help is greatly appreciated. Also, both Yuns I have work fine with microUSB input power.

It is hard to make out the actual connection to the Yun on your picture, but I assume you have triple-checked

And how do you know that it does not work, what are the symptoms?

You don't by any chance have the old 'while(serial)' in your setup() ?

It is hard to make out the actual connection to the Yun on your picture, but I assume you have triple-checked

Sorry about the picture's angle. I actually checked a little while ago and I'm only getting ~1.4V out of the 5V pin. Seems like something is wrong there. I verified this on two separate Yuns though.
The red wire is VIN on the yun and the black is GND.

bjarne:
And how do you know that it does not work, what are the symptoms?

You don't by any chance have the old 'while(serial)' in your setup() ?

I know it's not working because the 'ON' LED doesn't illuminate. (not trying to be a smart-a**) Other than that, I haven't even connected anything to it because I didn't see the light. No sounds, no nothing. :0

I don't use any old syntax, at least if i can help it

OK, it is always difficult to tell when you are not actually there, so excuse if the following is obvious.

There are two diodes between Vin and +5V out, so the output voltage can not be 1.4V if the input voltage is 5V, so I have to ask if you measured the 5V on the Yun itself. In the picture it looks to me like you are measuring the 5V while it is not connected to the Yun, is that true? Maybe you don't get 5V when it is loaded with the Yun, I would measure the voltage on the pins of the Yun to be sure.

In the picture I was in fact measuring 5v while disconnected. Later on, I had the bright idea of measuring the Vout from the 5v pin. Here is a pic of the 5v(Vout) from the Arduino. (I was wrong, it was ~1.19vdc): 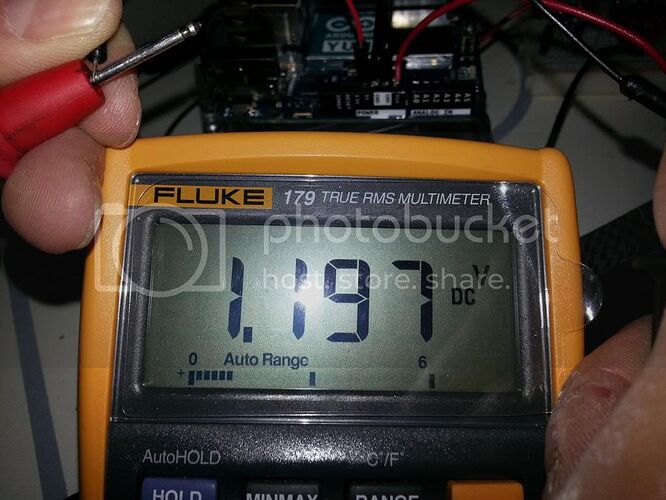 Here is a different pic of the Yun input and output wiring. The jumper wires are output(5v & GND) and the regular wires are VIN & GND: 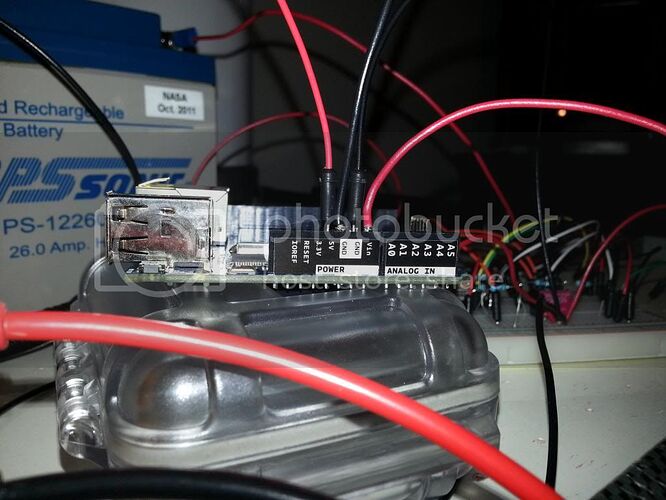 Once again, thank you for taking the time out of your day to help me.

It is still not clear to me, have you measured Vin while connected to the Yun, preferably on the Vin pin of the Yun itself? I have to believe that you will find it to be around 3V.

Sorry about that. I guess I misunderstood your request earlier :~. I just measured VIN on the Yun and it's 1.34V.

Ah, makes sense. I guess your regulator circuit can not handle the load.

It's a 5v, 1A regulator though. There are no components connected so theoretically the load should only be about ~250-270mA. I suppose I could try a different regulator but this just doesn't make sense to me.

What is the voltage at the input of the regulator, when the Yun is connected?

And you actually measured it with the Yun connected? Maybe the battery isn't charged?

Sorry, maybe that was you said in the last post.

So you are saying that you measure 12.83V on the input of the regulator and only 1.34V on the output? That sound like the regulator is either connected incorrectly or is defective.

I'm thinking you are right about the regulator. Unfortunately, I don't have my spare handy =(. The odd thing to me is that on the output leg of the regulator I measure 5.01vdc; almost perfect! This is very frustrating. As a side-note, this is a work related project. It will basically be a small weather system complete with two tipping bucket rain systems, GPS, TMP36 sensor and cellular modem. (That is if I can work out this solar issue!)

Sounds like an interesting project, good luck with it.

One last question, did you measure the voltage right at the input pin to the regulator with the Yun connected?

What are you using for the tipping buckets?

One last question, did you measure the voltage right at the input pin to the regulator with the Yun connected?

What are you using for the tipping buckets?