I've been spending the weekend researching this topic and bumped into this topic which seems to have raised similar issues to those I raise below. BTW, my electronics skills are close to zero. My objective is to have load sharing capabilities to allow me to build (I have already built one) a series of Sonos type WiFi speaker using the Pi Zero and the Hifiberry mini Amp.

All of these will be based on recycled 18650 cells that are assembled in parallel to allow me to have large autonomy of these portable speakers.

My current solution is a TP4065 (3x chip based one) which then has a 3.3-5V booster (I was going to add the link but its my first post on this forum so only two links are allowed

) on the load end to allow me to power the Pi Zero. I thought I had nailed this until I realised that I hadn't done my research properly. I discovered that I had three problems:

a) I had taken a big risk by parallelising 3x 18650 cells. Luckily they all came from the same laptop battery and were all charged to approximately the same voltage (+ or - 0.1V). The connection went smooth and nothing caught fire. The internet has mixed messages on this topic: some say these cells should never be connected in parallel, other say you can as long as you do it in mindful manner. I've concluded that the latter it true, and that any charging circuitry current would simply be shared based on the number of cells (in my case, the TP4065 1A charger provides a 0.33A current to each cell. I'm not concerned about this anymore and I think the prevailing opinion is that it can be done. Clearly, he more cells in parallel, the less convenient the TP4065 becomes (I understand that the TP5000 has a 2A charge current so could be a good alternative).

b) The TP4065 has a low voltage cut-off of 2.4V, which apparently is not good for 18650 cells. This is the thing that annoys me most about the TP4065, suggesting that the best usage of these circuits is to have them as charge only function (i.e. manually add them to a charger and then removing the cells and transferring them to the load units). The prevailing opinion seems to be that the low-cut off should be at 3V for 18650 cells. These units seem to resolve this issue, so I'm already leaning to substituting the TP4065 units with this circuit.

These MCP73871 units seem to be the answer to the need of having load sharing 5V power supply that has proper Li-Ion 18650 recharge/discharge management. Would people agree? Of course, the alternative is to use the $20 Adafruit units. Apart from the huge difference in cost, these Adafruit units are not advertised for 18650 Li-Ion chemistry cells but only for LiPo. From what I understand this doesn't make much difference but would appreciate to be enlightened on this matter.

Got a link to a datasheet ?

This is the one advertised on eBay where I bought the unit. Go to the bottom of the pages. Interestingly, it claims to be using a PMOSFET which I understand is used for the load sharing bit. But I skimmed trough the data sheet (really poor English ...) and can't see reference to load sharing.

Take a look at this one 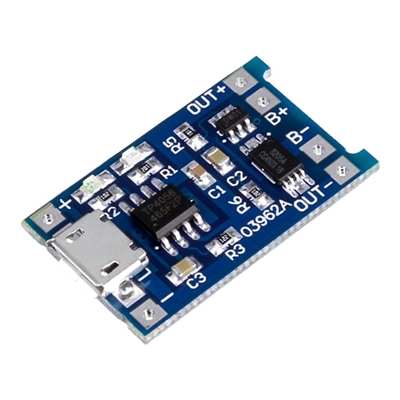 @CrossRoads, thanks for pointing me to this. I think its exactly the one I have. What is useful here is that:

a) its clearly stating the 2.4V Over-Discharge Detection Voltage

b) its the first time I see a reseller stating that two cells can be placed in parallel. This sort of confirms the conclusion I reached: it can be done but has to be done safely.

Based on this I'm still of the opinion that this unit is not great for the usage scenario I require. The 2.4V Over-Discharge Detection Voltage is the thing that concerns me most. From what I've read, this wrecks your Li-Ion cells.

HiFiberry plugs onto the Pi, and the Pi needs 5V supply, yes? 4B needs 5V supply (Pi charger is 5.1V, 3A).
I don't know about the speaker.
Would having the batteries in series with a ~12V charger, feeding into a 5V switching regulator make for a better solution? Then you just have one series charger for the batteries and don't have to worry about load sharing, and you keep under the batteries 3A limit discharge rate as well (5V x 3A requires ~ 12V x 1.25A plus switching loss, maybe 10%, so ~1.375A from 12V, 1.67A at 9V) .

I posted this link earlier, the circuit here also includes a TP4056, but as a over(dis)charge system it use a FS312F-G, to control 2 mosfets, i don't know what the rating of the mosfets used is, you are planning to use a fair bit of power, oh no of course, you are just going to use it for a long period of time. Anyway it should work.

Looks very interesting. I'll take a look at this over the weekend. Thanks for sharing.

I would just point out that there must be billions of protected lithium cells which use the DW01 protection circuit which has a 2.4V low voltage shutoff. In the vast majority of cases it must be working pretty well. And that 2.4V would typically be reached under load, so when protection is triggered, the battery voltage will recover somewhat, and may even get back to 3V, at which point the power will turn on again. I'm not aware of any evidence that the 2.4V trigger is too low - that it does any damage to the cell.

OP is using "recycled 18650 cells" that may not be protected.

Yes, he's adding his own protection. The question is what low voltage shutoff level to select. The DW01 shuts off at 2.4V, and the FS312F-G shuts off at 2.9V. But both turn back on at 3V. So the FS312F-G may power cycle a number of times before it no longer recovers to 3V. Of course it depends on the load. But that behavior may or may not be desireable.

Anyway, I keep seeing it said that 2.4V is too low, but I've never seen the evidence for that.

@ShermanP , I see your point and I too have been searching for evidence that 2.4V cutoff is not good for 18650 longevity. This should be quite a well known problem if indeed it were and there would be scientific evidence to back it up. I can't find any, which is somewhat surprise. It would be good if anyone came across some hard evidence to share it here. Using 18650 (whether recycled or not) as a power source is a common application in the world of tinkering.

Regarding the FS312F-G shuts off at 2.9V, your point is also quite interesting. As per my intro, I'm not expert in electronics or engineering but I can see the issue surrounding the continuous power recycling also being an issue that may not prove to be health for 18650 longevity.

BTW, I confirm that I'm using recycled 18650 cells that are NOT protected, hence me exploring safe options.

Second, the MCP73871 does have built-in load sharing, but my memory is that it has a fairly low current limit which may not be enough for your Pi.

Adding load sharing is in theory just three extra parts - a P-channel mosfet, a Schottky diode, and a resistor. But if it's convenient to set things up so you can charge the batteries, or power the device, but not at the same time, then you don't need load sharing.

I had problems with MCP73871 overheating at more than 1/2 amp battery charging, even with thermal vias and as much ground plane area as I could create. 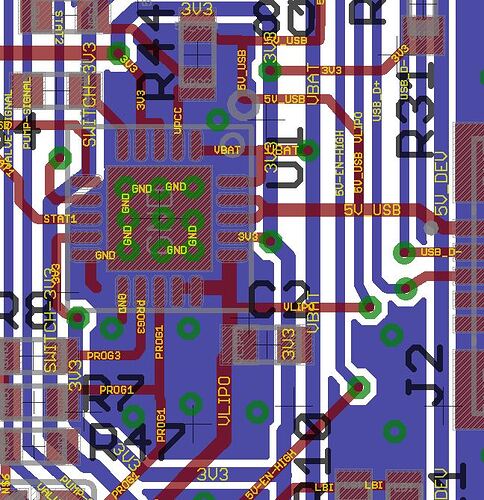 Andreas Spiess did a video years ago on various solar chargers, and I believe came to a similar conclusion - that the MCP73871 simply wouldn't provide more than 500mA charging current. The datasheet is very clear in saying it will do 1A charging current plus another 800mA load current. But it also talks about thermal regulation on both of those values. So I don't know what the problem is. You would think that a regulator with built in load sharing, and which works from a solar supply, would be very popular. But I don't think it ever caught on, and the reason may be that it just doesn't perform very well. It may be like those bidirectional level shifters that TI sells. I've never found anyone who used them successfully.

But the TP4056, with added protection circuitry if needed, is tried and true. You just may need to add load sharing if the load is going to be turned on while the battery is being charged. I made a video a while back on that subject relative to the 18650 battery "shield" V3. Toward the end it goes over what you might be able to do to avoid adding load sharing.

You have developed your project on 2 layer PCB but you must go on 4 layer PCB, then as you can see chip work better