Hello, I am trying to figure out how to tristate the miso pin on an RA8875 breakout board from Adafruit.

I want to connect an SD card and the RA8875 lcd driver at the same time, both using SPI

I tried following this diagram: 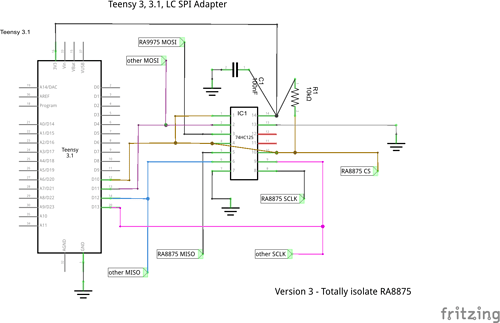 However, i noticed in its diagram it uses a 74HC125. I do not have one of those handy, so i used a 74AHC125 but it doesn't seem to be working.... the LCD screen still works, but only if i have the SD card disconnected... just like it did before i attempted the fix.

Is there are difference between the 74AHC125 and the 74HC125 and if there is (i'm assuming the A is there for a reason) is there a way to modify my connections to make it work?

Alternately, i heard that the Teensy has multiple SPI busses, but from what i can tell the libraries for SD card to allow you to specify which SPI bus to use???

AHC and HC families behave the same - the AHC is somewhat faster (we are talking ns).

If the diagram was a circuit diagram it would be easy to see what it does.... A wiring diagram
is opaque.

I believe the issue is that the miso pin stays high even when chip select is low, it's a design flaw of the chip

"RA8875 has a bug in MISO pin that doesn't work as tristate as it should be and remain high, the chip works as SPImode3 so the SCLK and MOSI are HIGH, the I/O of the RA8875"

so, basically, the drawing shows a way of doing this, to isolate the ra8875 spi lines from the rest of the spi lines. 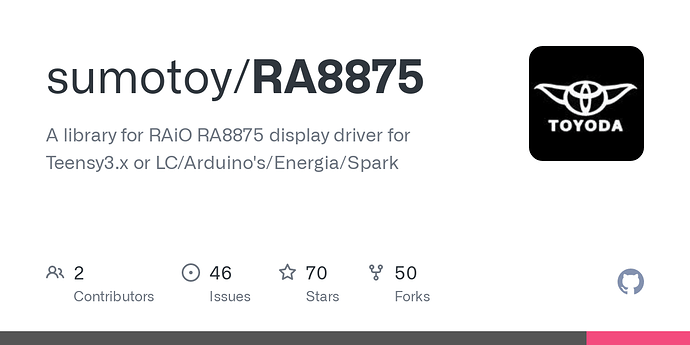 A library for RAiO RA8875 display driver for Teensy3.x or LC/Arduino's/Energia/Spark - Fix compatibility with other SPI devices · sumotoy/RA8875 Wiki

Just in case anyone comes across this, the issue is that my SPI speed was too high for the SD card. I fixed that by lowering the Teensy's SPI speed to 24mhz