Trying to use iPhone serial with Arduino

Ok guys, I'm sorry if i'm duplicating a topic here but I've been searching around this forum for a few days and I haven't really been able to find the specific information i'm looking for. I've been wanting to get started with the Arduino for a while but I didn't know what to do with it. A while back I stumbled across this project -> http://biobug.org/index.php/2011/12/11/sms-remote-start-working-prototype/ and I figured I'd give it a try. I've got an arduino uno r3 and an iPhone 3g (4.3.1 jailbroken) with a podbreakout mini hooked up on a breadboard that i'm trying to get to talk to each other, but it's not really working out. I ssh into the phone and run minicom to try and see if the serial connection is doing anything between the arduino and the phone. When the sketch starts up up it prints a hello string to the iphone (using software serial), which I can see in minicom. The major problem is I can't seem to send anything from the phone to the arduino. Last night I took the atmega off of the arduino so I could just use it as a USB UART (switched over to hardware serial pins 0 and 1). I started minicom on the phone and Screen on my mac (screen is pretty much equivalent to hyperterm) and it was the same situation- the computer could send stuff to the phone and it would show up in minicom, but the phone wouldn't send anything to the computer. I've never used minicom before, is there a special character you have to use to send something over the serial connection?

Here is a crude sketch for how I have everything hooked up:

when I had iphone pin 1 ground and pin 21 accessory pin hooked up to the breadboard, nothing at all would go across the serial connection. I could only get it to do anything when only the iphone tx and rx pins were hooked up by themselves without any ground connections- does that mean i'm trying to use the wrong ground pin on the breakout mini?

Here is the schematic the guy at biobug put up- should I try to hook it up like this and forget about the LLC? 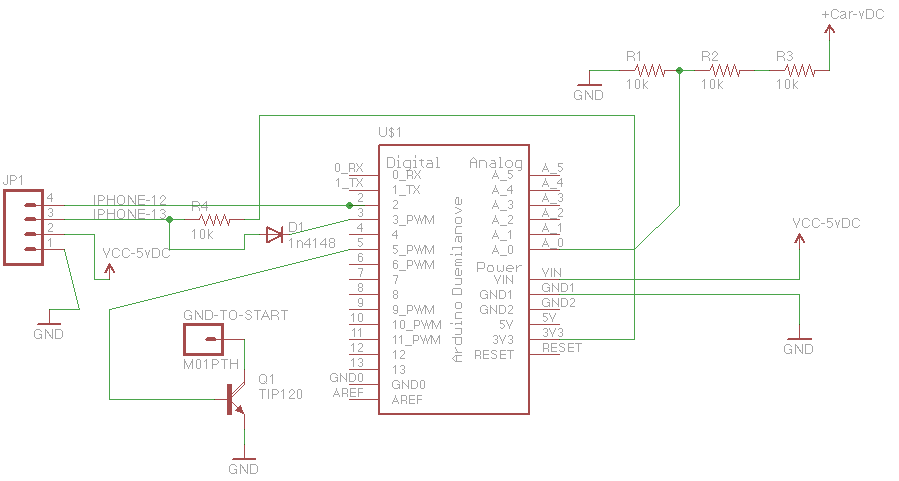 I don't have any of the sketch code that I was trying to use with me at the moment, but I can post it later if anyone thinks it's relevant. Suggestions anyone?

Thank you for your reply! As it turns out, there was some fuzz down in the dock connector that was keeping it from being completely seated. It is now communicating correctly, and the only wires I need are TX, RX, and ground. Apparently it doesn't need a resistor on the dock pin 21 at all.