What are those pads on a PCB board?

I have some PCB boards that I bought on Amazon. What are those little pads on the ends used for?

At one point in time, they could have been used to make contact with a connector the card was plugged into.
But since they are not connected to any of the thru holes, they do seem kind of pointless.

They are larger pads commonly used to attach wires that won't fit in smaller holes and also provide a larger more secure soldering of pins or sockets.

You can butt two boards together then solder heavy wire (example bare male header pins) to make a sturdy connection between the two boards.
OR
As previously mentioned.

They are larger pads commonly used to attach wires that won't fit in smaller holes and also provide a larger more secure soldering of pins or sockets.

I agree, they are for the heavier guage power wires that go to power devices like TO220 mosfets ,transistors, triacs and the like.

Surface mount edge connector? Not clear to me really.

Obviously, they are really there mostly because... they can be. The actual use is up to the customer.

I've never understood those either - it would be useful if they were connected to a through hole, kinda, maybe?

I don't find that kind of protoboard very useful - I always feel like "great, I've got this wire soldered down, now I need to connect this other... but the hole is filled now, so I have to sort of tack it on the side, or run a bead of solder across the back (which is tricky - solder only bridges when you don't want it to) 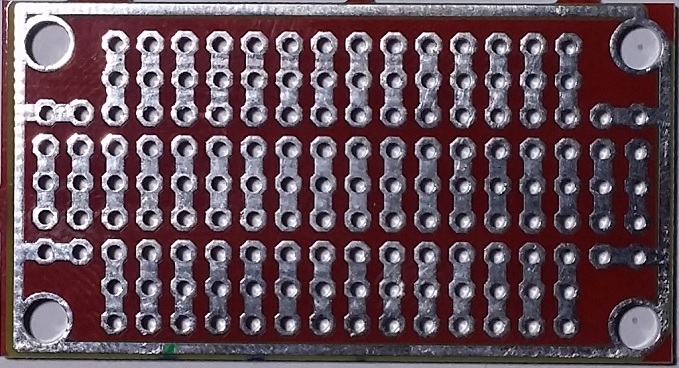 I find that to be more useful (also, conveniently enough, I happen to sell such protoboard

Such is commonly called is tri-pad board - its a compromise because many circuits require more
than 3 components at a node, and standard 0.3" pitch ICs don’t really work sensibly with it. 4 or 5 holes
(like a breadboard) is probably better for many things, but not very common to find. People just
go for strip board and make their own breaks in the tracks in practice.