Sorry, I read a lot of those questions already but I really really want to make sure Im connecting everything correctly as I don't want to spend more money on this project. I have arduino Uno (SMD) + motor shield from Adafruit. I am powering one 0.4A 12V stepper with it but the regulator is getting hot after a while and switches off. I am using a 12 V 1600mA NiMh battery pack. I bought this regulator: http://www.robotshop.com/dimension-engineering-de-swadj.html and I want to use it to power just the Arduino board. Where do I connect it ? The VIN ? Also should I output 5V or 7V from the regulator (it's adjustable). I would also like to power the arduino board from the DC jack if possible as this will be much simpler instead of using the pins. I suppose if I power it trough the DC jack I would need to output at least 7V from the external regulator because it will run to the Arduino's regulator too. Is that correct? And if that's not a good idea is it better to output 5V and use the 5V pin in the arduino ? Im little bit confused to what is better and where I connect if I`m not using the DC jack. Thanks and sorry for the noobish questions.

All are good ideas, the first offers the most safety, the last the best efficiency.

KE7GKP: You say "I am powering one 0.4A 12V stepper with it but the regulator is getting hot after a while and switches off". Not clear what you mean here? Are you talking about the motor controller board? Or are you talking about the Arduino? The schematic diagram for the motor controller is ambiguous about how its power relates to Arduino, but it doesn't look like any motor power is being drawn through Arduino. Do you have anything else connected to Arduino? I would not expect Arduino to overheat and switch off unless you had additional loads connected to Arduino. It should tolerate being operated from 12V into the VIN pin or DC input jack.

I am powering it through the arduino DC jack - the voltage regulator on the arduino itself is getting very hot. I also tried powering it through the external power on the shield , which basically is exactly the same as the other method. And no , it is only one stepper motor. I thought it will work too but it doesn't - it runs for 10 minutes, gets very hot and switches off.

All are good ideas, the first offers the most safety, the last the best efficiency.

hm. That's new. I have all the wires of the motor connected to the output pins from the motor shield. None of them goes directly to the battery because that's how I thought it should be connected :astonished: . It is this motor: http://www.robotshop.com/rbsoy03-soyo-unipolar-stepper-motor.html

So when I was looking in the specs I saw that Yellow and White are the center of the coils and they go to the Ground, Coil 1 has Black and Green wires that goes to M1 (or M3) of the shield and Red and Blue is the other coil that goes to M2 or M4 respectively. So now I understand your question, but I didn't know I wasn't supposed to wire it like that ? Is this why it gets hot ?

Actually I was following this while wiring it : http://www.ladyada.net/make/mshield/use.html And the stepper is directly connected to the pins on the picture. I actually never thought I should directly connect it to the battery and not the shield. More explanation here would be awesome as I`m learning new stuff every time.

Thanks for helping me KE7GKP,

Yes I AM powering it from the controller board. It is the 6 wire one.

I`ll try to explain it . From the motor shield example on the LadyAda site I read this:

For unipolar motors: to connect up the stepper, first figure out which pins connected to which coil, and which pins are the center taps. If its a 5-wire motor then there will be 1 that is the center tap for both coils. Theres plenty of tutorials online on how to reverse engineer the coils pinout. The center taps should both be connected together to the GND terminal on the motor shield output block. then coil 1 should connect to one motor port (say M1 or M3) and coil 2 should connect to the other motor port (M2 or M4).

So from the specs sheet of the motor I saw that the center taps are the Yellow and White wires. This goes to GND. On the picture of the connected 4 wire motor the center tap is the one that is GND. On the picture there is nothing connected to it. M3 and M4 are respectively for the two coils. Again from the motor specs to M3 I have connected the Black and Green wires and to M4 I have the Red and Blue wires. Now I wasn't sure in which particular order they go, but thought it will just reverse the polarity of the motor if I have reversed the coils.

This is how it's currently connected.

I read everything carefully and I can not see why this is not correct.

I have the battery going to the DC jack. There is also an option to wire it to the motor shield instead, but on the Lady Ada's forum they explained me it is all the same. This is how the shield is wired to the arduino: 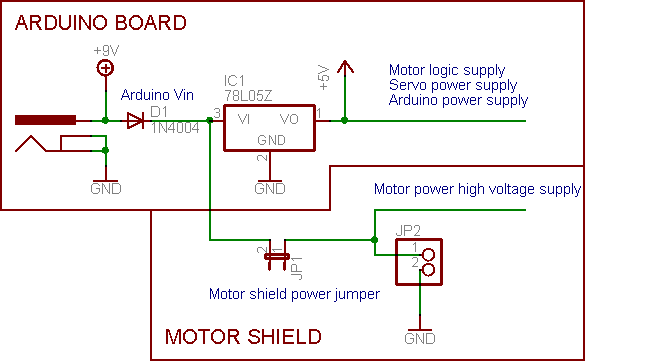 In the above tests I have used the battery (12v) and a DC adaptor 12V 2000mA. It doesn't matter which one I use -both makes the voltage regulator hot. I didn't waited too much as I don't want to run it too long hot like that.

That's why I wanted to use external voltage regulator just to power the arduino separately.

I see.... yes I confirm - NOTHING else is connected. Plain arduino board and a motor shield. I will try to investigate further then. THanks for the help!

The only variant where I have both the arduino and motor shield connected that doesn't heat up the regulator is when the battery is connected to the shield and the jumper is removed. But that makes sense as the jumper is what connects the power to the arduino.

One more experiment I did:

Connected the motor shield through the battery with jumper removed. Connected the arduino board with a USB cable. Everything works fine and nothing gets hot.