I’m looking for some clarification for my project…

I’m using a couple FlexiForce FSR sensors and looking at the suggested MCP6004 amplifier in PDIP packaging ( http://ww1.microchip.com/downloads/en/DeviceDoc/21733j.pdf ) so it and the sensors can be incorporated on a breadboard.

I’ve read that an inverting opamp could help make the FSR’s non-linear output more linear. So, I’m thinking that if I want an output voltage (read by the Arduino analog pin) near the 5V supplied by the arduino under a max experiment load to the sensor, then I would incorporate a resistor with a value close to that of the FSR under the certain load?

For example, if a max of 1kg creates 80KΩ resistance in the sensor and I want an output near 5V under the 1kg load, then I would incorporate an 80KΩ resistor into the circuit with one of the opamps in the MCP6004 chip?

Am I assuming too much by using the simple equation Vout = -Vin * (Rresistor / Rsensor) ?

Post a diagram, showing how you are going to connect the sensor to the opamp. Remember that the sensor is a resistor, not a voltage source that you can amplify. Leo..

Wawa: Post a diagram, showing how you are going to connect the sensor to the opamp. Remember that the sensor is a resistor, not a voltage source that you can amplify. Leo..

I plan to connect as suggested by the distributor. The recommended circuit is found at https://www.tekscan.com/products-solutions/force-sensors/a101 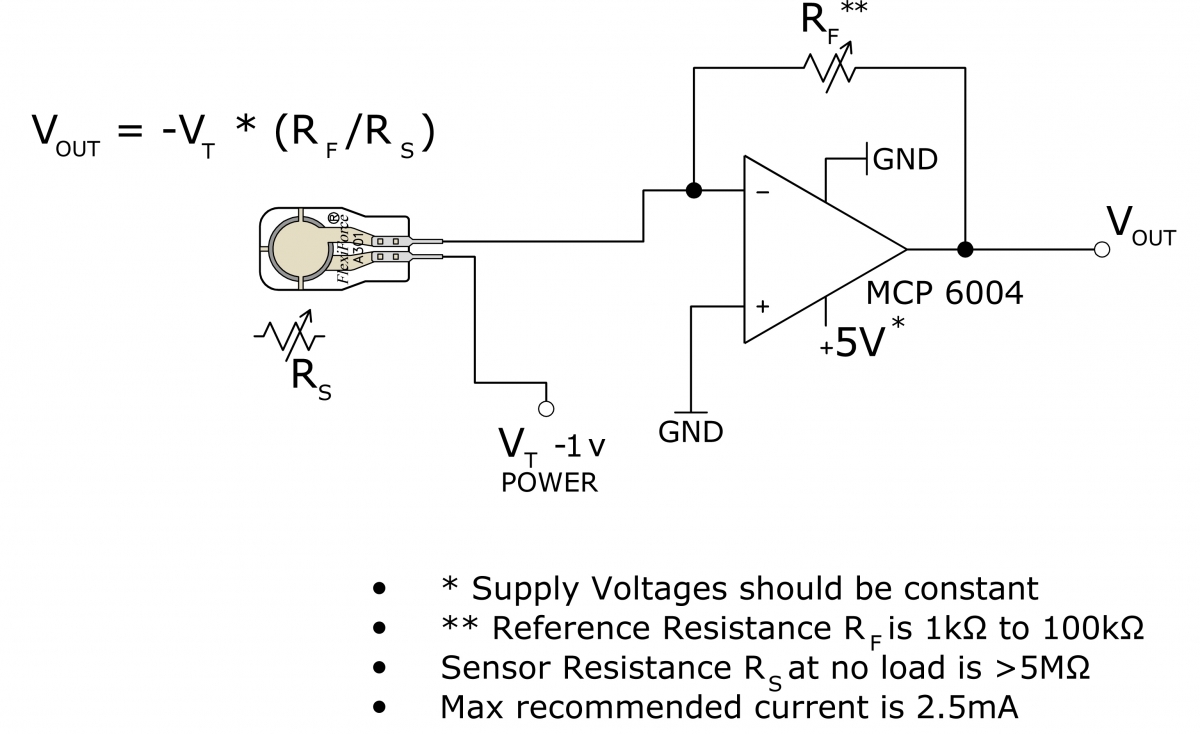 Sounds nonsensical to me. Or maybe the idea is using a constant current source circuit to convert resistance to voltage linearly? In general do this sort of thing in software, just get the raw data in and post-process - less hardware, fewer components.

I doubt the sensor itself has a linear relation between force and resistance (or conductance) in the first place.

My question is this:

Does it make sense to include a resister (Rf) with resistance equal to that of the sensor at some max force in order for the circuit to output near 5V at that max force?

Here is an interesting attempt at lineararity. http://electronicdesign.com/analog/signal-conditioning-force-sensing-resistors he designed a conductance sensor circuit, i.e. it more or less measures current.

MarkT: I doubt the sensor itself has a linear relation between force and resistance (or conductance) in the first place.

Your doubt is based on what exactly? The design of this sensor seems to suggest linearity with conductance. Not perfect but much more linearity than resistance. The mfg curves more or less back that up. Inverse relationships are killers for ADC resolution with software post-processing invert. One end of the scale has much higher resolution than the other making one of the sensor range unusable. It is much better to do the invert in the analog domain (circuit) if possible. It gets more use out of the sensor.