Hello. I have this mini-project that I've been doing for a while now. I'm making an RC boat that can be controlled using Bluetooth via a custom Android app. Below is an example picture of the schematic diagram of the connection (PS: Picture is not mine I just found it on Google) and I was thinking if I could change the two (2) HC-05s in the picture with HC-12, a wireless transceiver module that can both transmit and receive data up to 1.8km as stated on some specs sheets. I want to use HC-12 for my project since I need the long-range wireless function of the module, and HC-05 just limits my connection up to a couple of meters away. And as mentioned, I will be controlling the RC boat using an custom Android app. Thank you and have a nice day. 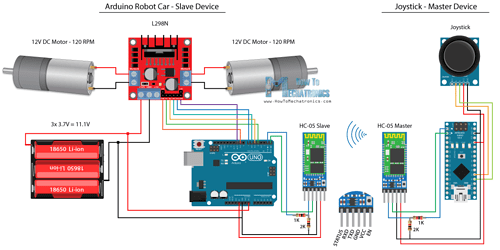 I may be wrong but as far as I know the HC12 is NOT a Bluetooth module. So it won't work with Android Bluetooth. And even if it did you wouldn't get very much range with the low-powered Android transmitter.

The HC12 is a 434Mhz radio device with a serial interface.

But your Android device does not talk 434Mhz radio.

Also its always worthwhile staing how much range you want from a wireless connection, do not assume that a range you see quoted online somewhere applies in all applications.

I have mangaed around 40km on a 434Mhz radio device similar to the HC12, yet in the urban area around where I live, you can be lucky to get a mere 100m with the exact same equipment.