Hello. I bought two 277 ballasts at a flea market for $4 last week. I use them in combination with a flyback for a high voltage power supply for wood burning. I have been powering them with 240 volts from my dryer plug. They work, but for one, I don't want to shorten their lives by undervolting them and I want their full power output. I was planning on using a microwave transformer with a 277 volt winding, but quickly figured out that it wasn't feasible because the transformers are inefficient. I was also wondering if i can add extra windings to the primary and eliminate the need for a secondary totally, like the attached picture. Sort of how Variacs have an output of 145 when 120 is supplied(overwinding). Would this work with a transformer like this? Suggestions on how i can get 277 easily from either 120 or 240? Thanks! 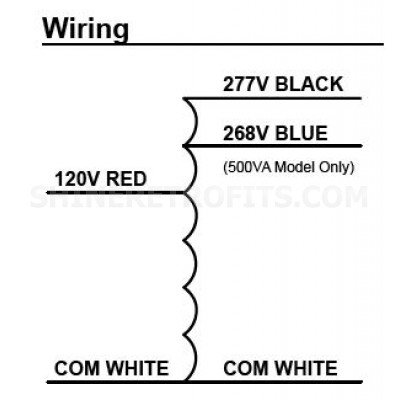 They work, but for one, I don't want to shorten their lives by undervolting them and I want their full power output.

You won't hurt a transformer by running it at lower voltage, but of course you won't get full power.

Power (Watts) is the product of Voltage X Current, and current depends on the load resistance-impedance (Ohm's Law).

...I don't know what you're doing or why "wood burning" requires high voltage.

Joseph3502:
I was also wondering if i can add extra windings to the primary and eliminate the need for a secondary totally, like the attached picture. Sort of how Variacs have an output of 145 when 120 is supplied(overwinding).

Be very careful with this sort of arrangement. There is NO ISOLATION! And, because there is no isolation, it's far easier to receive a lethal dose of current [think ELECTROCUTION] -- especially if you don't know what you're doing.

When you say, 277V, are you talking AC or DC? Because if it's DC you're after, then consider that 240VAC is an RMS value, and if you full-wave rectify 240VAC, and filter it with an appropriate Capacitance, you'll wind up with:

That's because you multiply an RMS value by the square-root of 2, to get the Peak voltage value. And in the case of what you fill get from a full wave rectifier, you gotta subtract the forward voltage drops of the diodes [two in series].
BUT, since "240VAC" is an approximate value, subtracting the forward drops merely gives you a "Nominal" voltage. The actual voltage will vary, depending on what comes down the mains lines.

AND AGAIN: DOING THIS WITHOUT AN ISOLATING TRANSFORMER [and, your Flea Market transformers are NOT isolating] MEANS THIS HIGH VOLTAGE IS NOT ISOLATED, AND THUS IS EVEN MORE DANGEROUS! And, that's not to say that doing it with an isolating transformer is not dangerous -- it's just a little less dangerous. You're just less likely to get a shock when you touch surrounding grounded points of conductivity, when the voltage is isolated from mains.
But, I'm unable to advise you on how to achieve what you want to achieve, because I'm just not versed enough on this topic [I'm more of a Digital guy] -- but I wanted to make sure you were aware of the dangers.

DVDdoug:
You won't hurt a transformer by running it at lower voltage, but of course you won't get full power.

Power (Watts) is the product of Voltage X Current, and current depends on the load resistance-impedance (Ohm's Law).

...I don't know what you're doing or why "wood burning" requires high voltage.

It's been too long for me to remember the details, but it seems to me there is more to it than P=IE. Especially when you start talking about impedance.
Impedance is a combination of a 90° DC resistive component, and a 180° summation of Capacitive and Inductive reactance. In this case, there will be very little Capacitive Reactance. But, Inductive Reactance will certainly play a role. In which case Power Factor must be considered. There is a 90° phase shift between Resistance and Inductive Reactance. Only the Resistive component [in both the load, and in the transformer] is described by the P=IE formula.
Maybe someone else, that knows this subject better, can elaborate (and even, correct, as needed).

This is AC I need. It normally comes from a 277/480 three phase transformer by connecting hot to earth (square root of 3) in an industrial setting(schools, factories, large office buildings, etc.). I need some kind of AC supply that outputs around 277 volts AC (plus or minus a couple volts).

Do you mean connecting hot to neutral? It seems to me, in my not so educated opinion, that connecting Hot to Earth Ground, is a very bad idea. Connecting Hot to Neutral is also not such a grand idea, either, unless it's through some sort of load -- otherwise, your transformer windings, and external wires, will be your load, and that usually leads to smoke, fire, sparks, and all manner of pandemonium -- or, at best, a blown fuse or popped circuit-breaker.

I am sorry I meant to say Earthed-Neutral.

ReverseEMF:
P=IE formula.
Maybe someone else, that knows this subject better, can elaborate (and even, correct, as needed).

If they are modern electronic ballasts, raising the the input voltage will do absolutely... nothing. Well, it will reduce the input current but that still means nothing to what you're doing.

Please post a photograph of the device label or an exact make and model. Until you do that, you’re just wasting time and effort for... nothing.

It is a Lutron Hi-Lume dimmable and a Sylvania Quicktronic. Both 277. The Sylvania is a magnetic type, and the Lutron is an electronic. The magnetic works fine because it is just a 277 to 600 VACrms step up transformer. It is just underpowered by about 37 volts. The electronic one, however, will not start because it's not getting the correct voltage. It is more sensitive to input voltage. It needs 277 volts ± a couple of volts.

You could create a boost transformer with a 100va or so (I doubt you need any more than that) 120/240 to 24 vac control transformer. You just connect the secondary in series with the primary and run it as an autotransformer. If it had dual 120 primaries, you put all three coils in series and power it with 120 for an output of 120+120+24=264 volts. It will have to be phased correctly otherwise it will buck rather than boost. Trial and error will get you there, just test unloaded with a voltmeter. That’s about the best you can do with commonly available parts.

Hopefully you can get a transformer for really cheap or borrow one to test because it probably will not make much of a diffference in the burn. Ballasts are a poor choice since they are designed to limit current. A byproduct of that behavior is that the output voltage drops off in order to maintain a constant current. The only way to increase the voltage is to increase the resistance of the wood - which means dry it. This the opposite of what you really want. Translation? Ballasts don’t work for the purpose and I don’t think jacking the input voltage up is going to make any difference. The moisture content of the wood is going to determine the voltage.

A repurposed transformer from an old, big microwave (modern ovens don’t have transformers) is a better choice since it’s a straight step up transformer without the inherent current limiting. If you overload it, yes the voltage will drop when the core reaches saturation but you don’t want to let that happen since that will let the smoke out.

I actually started out with the microwave transformer. I feel uncomfortable using the microwave transformer because it can deliver 1 amp at 2kv. They also run on full saturation mode and trip my breaker every two minutes. The ballast only pulls 0.43 amps when completely shorted so I don't have to worry about blowing breakers. I am currently looking for a neon sign transformer for it, but until then, I only have flyback transformers. They are good because they don't deliver a whole bunch of current. The ballasts are good too because they don't push a whole lot of current into the flyback and burn it up. A ballast is perfect for my application. Woodburning uses a mixture of baking soda and water soaked into the wood to make it more conductive. As for the 277 supply, could I pick up a 120/240 to 24vac at my local home Depot or Lowe's or my electrical surplus store or would I have to order it? If I supply 24vac to it's secondary to get 240 then have another transformer with a 32 volt secondary wired in series with the 240 volts to make 272 volts?

Joseph3502:
. The ballasts are good too because they don't push a whole lot of current into the flyback

Typical ballast is just inductor when starter is on the heating elements increase the temperature inside the tube in the moment when going off the flyback spike igit the vapor in the tube then applayed voltage to tube is 110 V.
So the balast is not some kind of transformer or autotransformer. 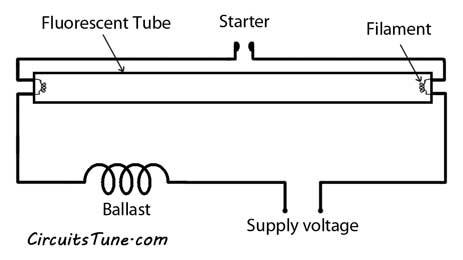 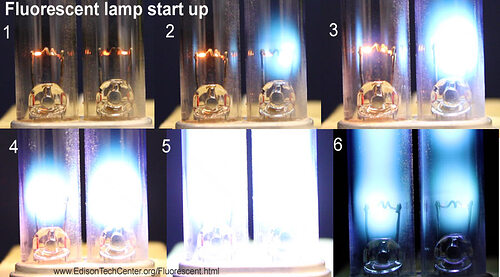