I have a project I'm working on and have a few newbie questions.

Is it safe to run all these three components off one DC input? (All connecting to the same source?). The motor will be disconnected occasionally, so I don't know if that could cause any issues for the other things connected to the power source when the motor stops and starts.

Should I have a fuse in there? As previously I have had a cheap DC power supply from Ebay and it failed and killed the DC input of my arduino mega, so don't want it happening again.

Just double checking that a 12v 2a power supply would be enough, as far as I know motors can consume twice as much current when starting, so I should be safe I think. Or can this startup load be even more?

Should I use some kind of voltage step down converter for the arduino nano? It's rated for 12v, but don't want to burn it out, so am thinking about dropping down the voltage a tad, maybe to 9v.

See pic below for very basic image of DC wiring.

How are you controlling the motor?

I was going to use a motor driver, but since the motor needs to be on 24/7 I thought I may as well just connect it straight to the 12v DC.

I would want to see what the power rail looked like when that motor was running. I would think you might want a few extra caps prior to the Arduino to smooth out any fluctuations that the motor will cause. But, I think the bigger problem may be that motor going off line. The motor is inductive and switching it off causes a voltage spike on the power rail. I think you will want a flyback diode across the motor.

I've used these in a lot of my projects, having experienced the same thing you did. Some of the "wall warts" just don't regulate well enough and with no load, they can go over the 20V and make Arduino go boom!

They are available at Digi-Key in 9V versions, that is what I would use.

rmetzner49:
I've used these in a lot of my projects, having experienced the same thing you did. Some of the "wall warts" just don't regulate well enough and with no load, they can go over the 20V and make Arduino go boom!

They are available at Digi-Key in 9V versions, that is what I would use.

I had (I knew I was taking a risk to begin with lol, no not going to explain it either) a 12v 1amp switch mode power supply go boom and bits of diode and capacitor turned it into a musical instrument when shook.. the fuse box tripped too.

I would use a MB102 Breadboard Power Supply Module 3.3V 5V to power arduino.

I would use a MB102 Breadboard Power Supply Module 3.3V 5V to power arduino.

Well, you get what you pay for! I just got done lecturing about how "wall warts" don't control their voltage very well and then you suggest a Breadboard Converter that suggests 12V input maximum. Before you recommend things, you should find what the MAXIMUM input voltage is that it will tolerate. I've seen the wall supplies go over 20V when rated at 12V. So unless you can find that device has at least a 25V input rating, it won't live very long. The Arduino already has a regulator on it to convert "RAW" to 5V, but if you go over 20, you're history.

I do use Breadboard Converters that suggests 12V input maximum every day. Day in day out. I run servos, steppers, pumps., arduinos, Mini and nano, coin acceptors etc. And never had to replace anything. Do your own research running any of the above on any arduino power pins is not recommended. A 12 volt wall adapter hitting 25 volts is really rare. So use a fuse. If your that worried about it.. But thanks to a breadboard converter. I don't have to worry about it. Like what i said do your own research. Feel free to try it your way.

Is this "Meanwell LED driver" a switchmode LED supply - in other words is it
pulling 700mA from the supply or somewhat less (due to buck conversion).

If its pulling 700mA then your motor only gets 1.3A, which might be an issue at
startup.

When I go to thrift stores, I keep my eyes open for switchmode power supplies meant for things like ethernet switches and such. 12V at 1A or more, or 5V at 1A or more. They typically have excellent regulation.

I still test them, of course.

A 12 volt wall adapter hitting 25 volts is really rare. So use a fuse.

Only someone with absolutely no experience would suggest using a FUSE to protect a sensitive device. Tell me, if I put a fused 25V into the Arduino RAW pin, what do you think will blow first?

I know you don't run anything significant off the Arduino's on-board regulator. That is not what I suggested. My suggestion was to connect the 12V wall-wart to the motors. Then, connect the little 3-terminal switcher with a 9V output to the RAW pin on the Arduino. Same as your Breadboard Power Supply connection, only much smaller. Either solution will work just as effectively in decoupling the motor from the Arduino. My point which you missed is, don't run the motor and the Arduino off the same point even if the Arduino says it can handle 12V. Motors will reflect a lot of noise back onto the power supply's output and the idea of the pre-regulator is to have the 9V regulator "swallow" the noise before connecting to the Arduino. With this method, you have TWO regulators doing the cleanup: The 9V regulator and the Arduino's 5V regulator. Between the two, it provides a lot of isolation from the motor(s) and splits up the heat dissipation almost equally between the two.

patmale:
So use a fuse.

Please explain how a fuse, a current limiting device, can limit voltage?
A 1A fuse won't blow until you put more than 1A through it, whatever the voltage. 1kV at 0.5 A still won't blow it, but it'll sure blow your Arduino and, possibly, you.

Exactly. The other point being, even if you fuse it at 1/10 Amps, if you supply 25V to the Arduino RAW pin, the Regulator on the Arduino will BLOW in less than a microsecond. Then, milliseconds later the fuse will blow. If you're lucky, the Regulator will fail in the shorted mode thereby sending the 25V to the rest of the board.

rmetzner49:
Exactly. The other point being, even if you fuse it at 1/10 Amps, if you supply 25V to the Arduino RAW pin, the Regulator on the Arduino will BLOW in less than a microsecond. Then, milliseconds later the fuse will blow. If you're lucky, the Regulator will fail in the shorted mode thereby sending the 25V to the rest of the board.

That kind of luck I don't need.

Well, if you thought about how a fuse blows you could argue under certain conditions (but this does not relate to this) conditions.

A fuse blows when a certain amount of current is reached, not voltage.... But, one could argue Current is proportional to Voltage, you're simply not going to be able to get 1amp or 2amp current flowing if all you're using is a couple of volts, unless that voltage is pumped up you're not going to get significant amount of current...

So you could say a fuse protects against voltage, because without voltage you wont have the current XD

Nothing new happens until you apply too much voltage, and only after the regulator fails will you see increased current.

Fuses are more about protecting things upstream, and about protecting from fire. That's why a piece of electronics plugged into a 15A outlet may have a 2A fuse in it. Because 10A flowing through a catastrophically failing DVD player will never snap that 15A breaker, but will likely start blowing flames out of the device.

I just received one of the MB102 Breadboard Power Supply Modules and it was DOA. IMHO they have some QC issues. It is not a complicated circuit, but even so it's output ls limited to 700ma max. Attached is a schematic if anyone is interested. 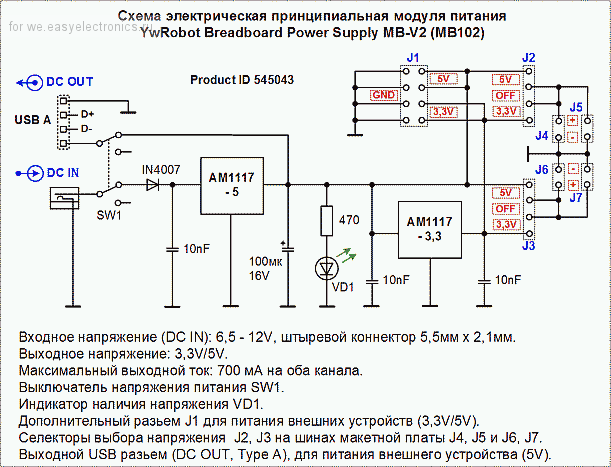