How do I hack a video input into this 5" CRT?

I've always wanted to make an oscilloscope clock or something similar with a really small CRT. Perhaps input some video with the use of something like the Uzebox game emulator.

I found this cool little 5" black and white CRT in the garbage the other day. I though they tossed it because they lost the 12V power supply. I plugged one in, but nothing. I couldn't open it since it was all sealed up with these really wacky screws. Not the little star ones either, something I've never seen before. I basically just took a pair of cutters and cut the top of the case off. 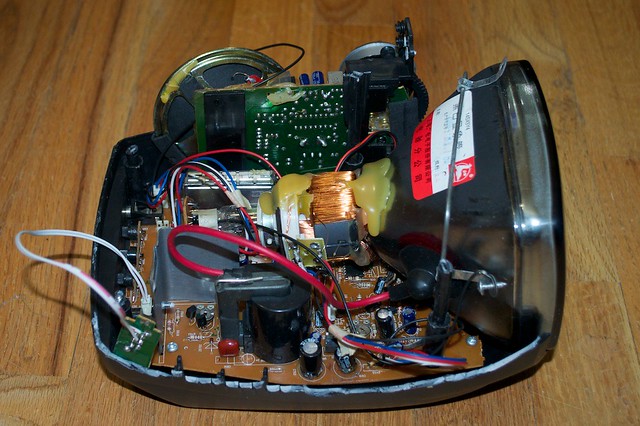 I realized right away what the probable culprit is. These 2 caps have popped. I could try and swap them out and see if it breathes life back into the TV. 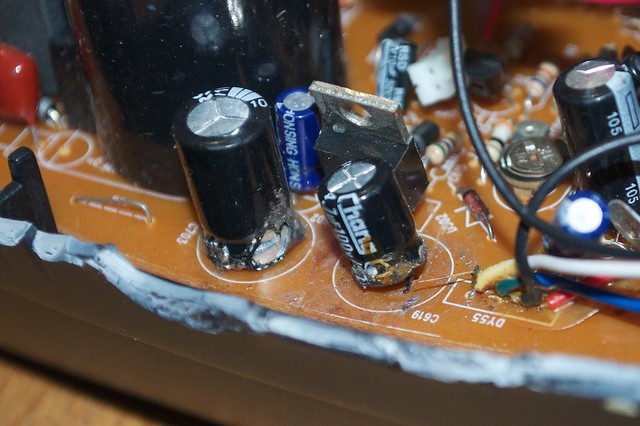 The thing that stinks about this TV is that there are no inputs. I could just hack a Raspberry pi or an Arduino into it and generate some simple text of graphics and use it as a clock.

So the question is, does anyone know where to begin in hacking an input into the tube? I know the dangers of CRTs. I've worked on computer CRTs and have disassembled Macintoshes before. I know how to discharge a CRT.

I suppose I could ditch the speaker, and the AM/FM board to trim things down. I just don't know how to go about inputting a video signal. Anyone have any suggestions on where to start? What am I looking for? I'm no stranger to electronics or making my own PCBs. So if I have to make a little video input board to interface with the tube, even better.

On many TVs of that vintage, the RF section can be relatively independent, with a video signal coming out of it. However identifying that safely takes a person with real TV experience. And even then, there may be no point in the circuit where there is a recognisable 'video' signal that can be tapped into.

An old RF modulator like used to be used with TV-based home video games might be the best bet. I've seen RF modulators with CRO inputs that kind of make a CRO screen turned on the side. You would be looking for a kit from the 80s or 90s for that.

I've seen little TVs like that in thrift stores for $5, and they work. Some of them have video inputs.

As much as I’m itching to run down to Walmart and pick up a $30 cheapie TV to get started with the code, I really want to see if I can get this Craig TV working. The only reason I started this project is to make use of the find. Seems like it might defeat the purpose if I just go out and buy a new TV. I ordered some new caps to replace the ones that popped.

While I wait for the caps to arrive, I did manage to throw together some code and try it on one of my LCDs. I was able to pull the date and time out of my DS3231 breakout and display it onscreen. So far so good.

But now that I think about it and see how easy it is to display text on the TV, I might just go for it. If the TV I found is unrepairable, then I might just pick up a new one to hack. I think it’ll look really cool.

I replaced the caps in the mini TV. No luck. It's toast. I'm pushing on with the code in the event I come across another little TV. So far so good. 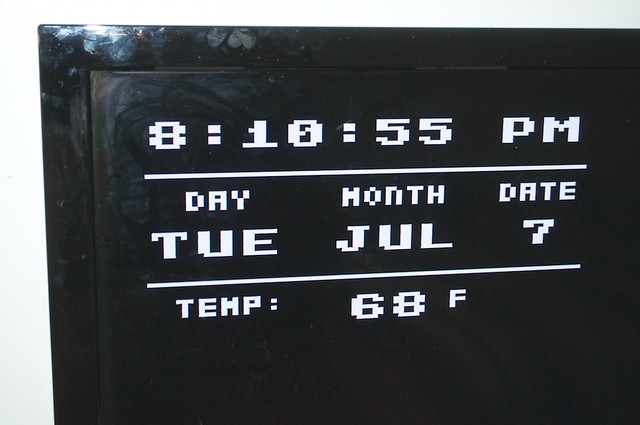 The screws were probably "Snake eyes".

Two capacitors blowing at once is no coincidence - it indicates the were either subject to a gross voltage overload, or unrectified AC due to a rectifier failure, so you would generally expect other damage as well.

Two capacitors blowing at once is no coincidence - it indicates the were either subject to a gross voltage overload, or unrectified AC due to a rectifier failure, so you would generally expect other damage as well.

Actually, upon closer inspection they turned out to be just regular Phillips. It's just that the previous owner must have tried to get into it and chewed the screws up with something. Whatever screwdriver he tried to use definitely ended up giving the heads a wacky shape.

In any case, the project is full steam ahead. I got my hands on an old camcorder viewfinder CRT and got my code running on it. I chalked up a PCB and ordered it from OSH Park. I should have it in about 2 weeks. I can then put it all in a sweet enclosure and finalize the code.