Is the FQP30N06L a logic level mosfet? This is from a post that is about a year old referring to the the FQP30N06L:

Both those MOSFET types require 10V of gate drive, they won't work properly with 5V - they might turn on a little bit, but they won't do so reliably.

When looking for MOSFETs for direct drive from logic level (5V) signals, you must get logic-level MOSFETs. The key spec on the datasheet is the value of Vgs at which the Rds(on) is specified. "Rds(on) at Vgs=4.5V" is typically the specification to look for. 4.5V is used to allow for below-spec 5V supplies. If the only Rds(on) values are given for Vgs=10V, or if Vth is specified as "2--4V" then is NOT logic level.

Vth (threshold voltage) confuses a lot of newcomers - its the voltage at which the device switches OFF. For logic level devices it will typically be 0.5 to 1.0V or so.

I bought that mosfet from Sparkfun without looking at the data sheet because they claim that it is logic level.

If you've ever wondered how to control the headlight of a car from a microcontroller, a MOSFET is what you need. This is a very common MOSFET with very low

Here are some screenshots of the data sheet that I don't understand. http://dlnmh9ip6v2uc.cloudfront.net/datasheets/Components/General/FQP30N06L.pdf 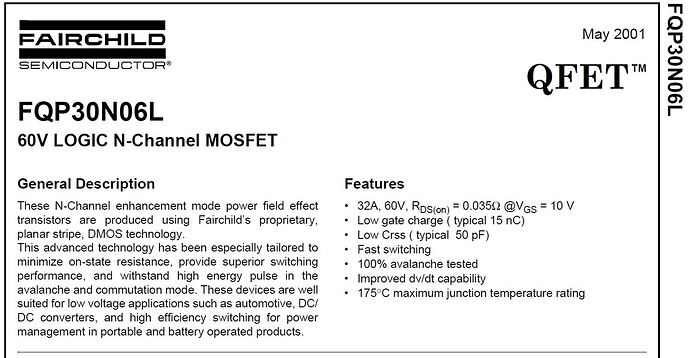 It is a logic level power mosfet. However it's Ron value will be slightly lower with a +10vdc gate voltage Vs a +5vdc gate voltage applied. When you are dealing with trying to use the maximum devices current rating there are other specifications just as important as the applied gate voltage, such as gate drive current capacity, switching frequency, device operation temperature with or without external heatsinking, etc.

I haven't tried to use such distributor's search filters much, but the picture you posted shows no filter selection option that would allow one to differentiate between a logic level and a non logic level mosfet devices.

Personally I think newark.com has the best search. It does allow you to search by Rds(on).

Doesn't look like that particular table's any use. Farnell do a better job with the Vgs value for Rds(on) being one of the search
terms. However don't get me started on their system, so many ways their search could be improved!!

Some manufacturers include an "L" in the part number if its logic level, but you have to know their
particular naming conventions to be sure. ST microelectronics and International Rectifier both seem
to use this convention.

Generally a FET is more likely to be logic level if its in a surface mount package, so TO220 and so forth
are mainly 10V devices, but its only a general trend. Some surface mount packages like DPAK aren't
particularly small and can be soldered onto strip board fairly easily, note.

Some surface mount packages like DPAK aren't
particularly small and can be soldered onto strip board fairly easily, note.

Good tip. I was wondering about that. thanks

Good tip. I was wondering about that. thanks

To be a bit more informative: D2PAK is the big one, DPAK is a little smaller, you have to be careful
soldering the drain to have a powerful enough iron (and cut stripboard carefully to avoid unintended
shorts as the back of the device is mainly bare drain tab).

SOIC-8 is trickier, best done on PCB really, but can be done on stripboard messily (pin 4, gate, has to
have a trace to itself, the rest will use several): 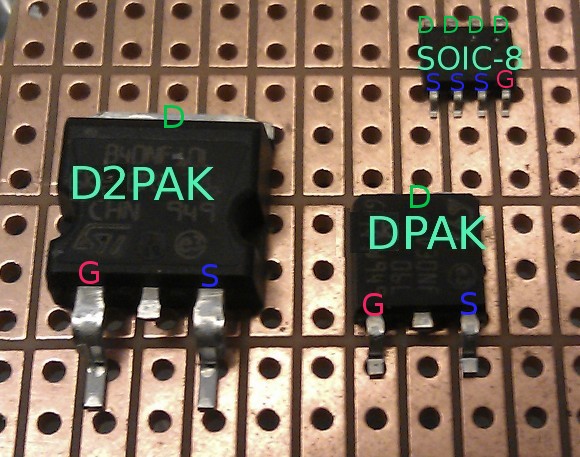