My first "all hardware" project.

Hi all, long time since I've been on. I'm working on a small circuit with a laser and LDR as a trigger system and a self charging capacitive timer to hold a solenoid energized.
I'm having a problem with the triggering effect not working and I'm not getting correct voltage on my solar power circuit after the 2.4v Zener.
shouldn't the full battery voltage be passing through the Zener?

I'm using a battery to simulate a solar panel at the moment.
(yes, I checked the battery voltage. It is at 3.8vdc.)

the current operation of the circuit holds the solenoid energized in all conditions, until battery is disconnected.

attached is the circuit diagram.

LandonW:
I'm having a problem with the triggering effect not working and I'm not getting correct voltage on my solar power circuit after the 2.4v Zener.

Hi,
What should the triggering effect be?
What is doing the triggering?
What delay do you need?
Is the solenoid a "relay" to switch the laser ON and OFF.
We need much more information thanks.
Tom......

As far as I can tell it's supposed to run the laser all the time, and when the laser beam is broken it turns the relay on and off (after a time delay) but only when the solar panel is illuminated.

Why would you expect to have the full battery voltage at SP+ when it's being driven by the solar panel and there is a voltage divider formed by the 500r and 2k resistors? Is that voltage at that point high enough to meet the minimum gate voltage and turn the mosfet on?

The laser diode with it's and current limiting resistor makes sense (although it's not a good way to drive a laser diode). And the mosfet driving the relay make sense. But nothing else does. If this is a simple capacitor based time delay there's no reason to use a regulator. And the remainder of the light sensitive circuit is overly complicated.

More info as requested....
The circuit is meant to function only in the day time. The 2.4v zener is meant to be a control against running the battery dead when/if light conditions aren’t great.
The voltage I’m getting after that zener is only 2.4v
It’s acting like it’s clamping when it’s not wired to behave like that. I realize there is a voltage divider in a few spots, that’s why I asked if the “pull down” resistors needed to be a greater value.

As of now, the solenoid is energized at all times with battery and using a battery to simulate solar power.
The laser is on but dim. I even removed the resistor from the laser section of the circuit and it is still dim. When I aim the laser at the LDR the solenoid stays energized when it shouldn’t be.

The plan is for when something breaks the beam then the solenoid will energize and only in the day time.

I'd break the whole project down into chunks.

Have you proved that the circuit to detect daytime actually detects daytime?

Have you taken into account that they way the zener is wired in the circuit the circuit will not operate as you want? 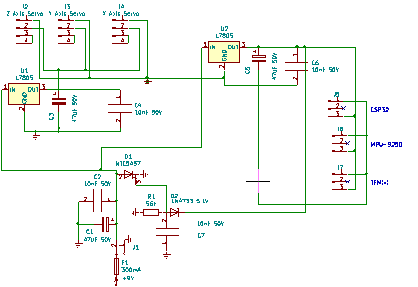 I was under the impression that the zener would pass anything over its zener voltage. Maybe I’ll just take them out and use a different resistor.
The day time detection circuit is basically if the solar panel is making voltage. That’s why I put the zener in there in the first place. It was an attempt to make a threshold voltage that would shut off the circuit.

Is the schematic you provided a variation of what I’m trying to do?

Hi,
Where is the laser on your circuit?
What function does it have?

Tell me if I'm wrong.

You have the laser pointed at the LDR.
(Is the laser that LED in the top righthand corner of your circuit, if so, why isn't it labelled as the laser?)
What voltage is the laser rated at?

When the laser connection is obstructed, the solenoid is supposed to be energized for a certain amount of time.

That is the basic operation?
If so, then get that working first, FORGET about the battery and solar charging.

Have you heard of an LM555 IC, it is a very versatile timer chip.

Restart you design with the LM555, you will not need the convoluted circuit you have now.

@tom
Yes the laser is in the top right. Depicted as an LED. It is an LED laser.

Yes, you understand the basic operation.

The solar is for two functions. To charge the battery and to turn the circuit on or off depending on time of day.

Yes, I did think about using a 555. I’m not super experienced with them or how to use it as a timer for on and off purposes. I’ve only seen or used them for PWM.

This might, or not, interest you Power ESP32/ESP8266 with Solar Panels and Battery | Random Nerd Tutorials

LandonW:
I was under the impression that the zener would pass anything over its zener voltage. Maybe I’ll just take them out and use a different resistor.

D2 is the 5.2V zener. D2 will not begin passing, or conduction, until the voltage output of the regulator exceeds 5.2Volts. Once D2 reaches the the threshold voltage of D1, D1 fires and shorts the incoming voltage to circuit common, which causes the fuse to blow. The way D2 is wired it acts like a trigger. I believe that is what you are trying to do and create a trigger.

@Idahowalker
Thank you. I think I’m going to go with the 555 route. I saved your schematic incase I go back.

Off topic. Are you from Idaho? I am from the TwinFalls area.

LandonW:
@Idahowalker
Thank you. I think I’m going to go with the 555 route. I saved your schematic incase I go back.

Off topic. Are you from Idaho? I am from the TwinFalls area.

I am in the Western part of the state of Idaho.

I figured it out.... the mosfet I was using required a negative voltage on the gate to shut off. Also I switched to a mono stable 555 circuit.

At least I’m pretty sure that was the problem. I isolated the solenoid part of the circuit and the solenoid was always energized no matter what I did with the gate. I switched to a npn and it worked normally until it burned up do to over current.

Time to get the right parts I suppose...thanks for the help.