I am trying to power 4 led’s as if they are part of an RGB light strip. I am powering them off 12v, as the end goal is to add more and create my own version of a custom light strip. I am using common anode led’s and using the Arduinos PWM pins.

My question is about the use of resistors that are found in RGB strips. With all Led’s in parallel, will I need to use them? I haven’t hooked the board board up yet out of fear of blowing the LED’s, I spent $7NZD on each led, so want to check. Will the 10k resistors on the MOSFETS be enough?

The only information that I can find on these are as follows:

With all Led's in parallel, will I need to use them?

Will the 10k resistors on the MOSFETS be enough?

Those are not in the circuit of the LED's. It is worrying that your schematic shows that they are and suggest you physical layout is not correct.

Edit Indeed on further examination you seem to have the 12V power directly across some LED's which would instantly burn them out.

12volt LED strips have three of the same colour LEDs and a resistor in a string.

You can’t do the same with LEDs that have the three colours connected to a common pin.

“I spent $7NZD on each led”
Wow. That’s seriously overpriced.

You can get addressable LEDs like that (not on a strip) locally for <NZ$0.50
They don’t need the mosfet, but must run on 5volt.
Search for “addressable LED” on TradeMe.

You normally have 220ohm between Arduino pin and the gate of a fet (must be logic level).
And a 10k bleed resistor from each Arduino pin to ground.
In your diagram, each cathode of each LED needs a current limiting resistor.
A 12volt supply is “wasting” about 75% in the resistor as heat, since Vf of the LEDs is ~2.2-3.3volt.
Better use a 5volt supply (old cellphone charger).
Leo… (NZ)

Don't power that up you will destroy the leds!

Yes, you need a series resistor for each led cathode. Slightly higher value for the red cathodes. Use ohm's law to calculate the correct values.

There is no point using a 12V supply for your circuit. You might as well use 5V. The extra voltage will be wasted.

The reason I am using 12v is that my project is for powering a lot more than what I have at the moment. I am creating LED lit lettering, and each letter will be about 4 led's in series (I have just decided).

I have found some better diagrams of what I want to achieve. However there are two diffrent versions.

This version has a resistor at the end of each series chain,

and this version has 3 resistors per led. 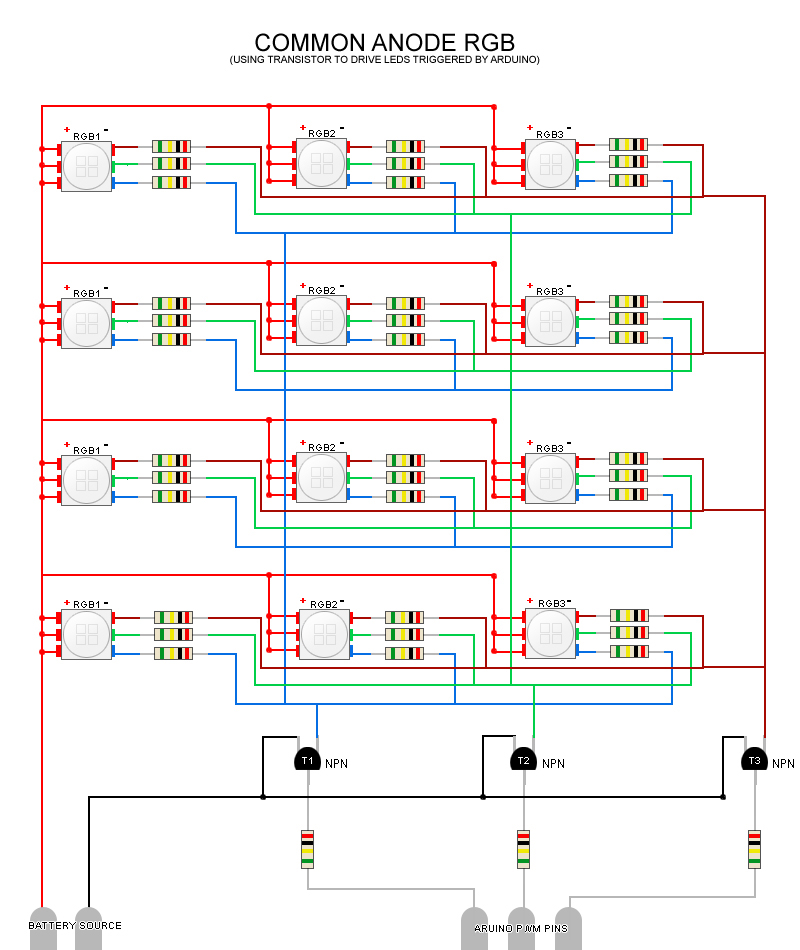 the problem i am now facing is that I am not sure how to determine what makes connecting these led's in this fashion "in series", to me it seems that no matter what you do, the result is always going to be parallel. Can anyone explain this?

like for example, look at my breadboard wiring again, specifically where the LEDs are. http://i.imgur.com/xcqbctT.jpg

Just because they are in two row's of two, for me, doesn't make them a 2 x series connected led's and then 2 parallels. To me it looks like the entire thing is in parallel, and that there is no way to escape this. If i am wrong can someone explain it to me?

When an led has 6 pins, then I can understand how to achieve series, but with 4 pins, I am lost. 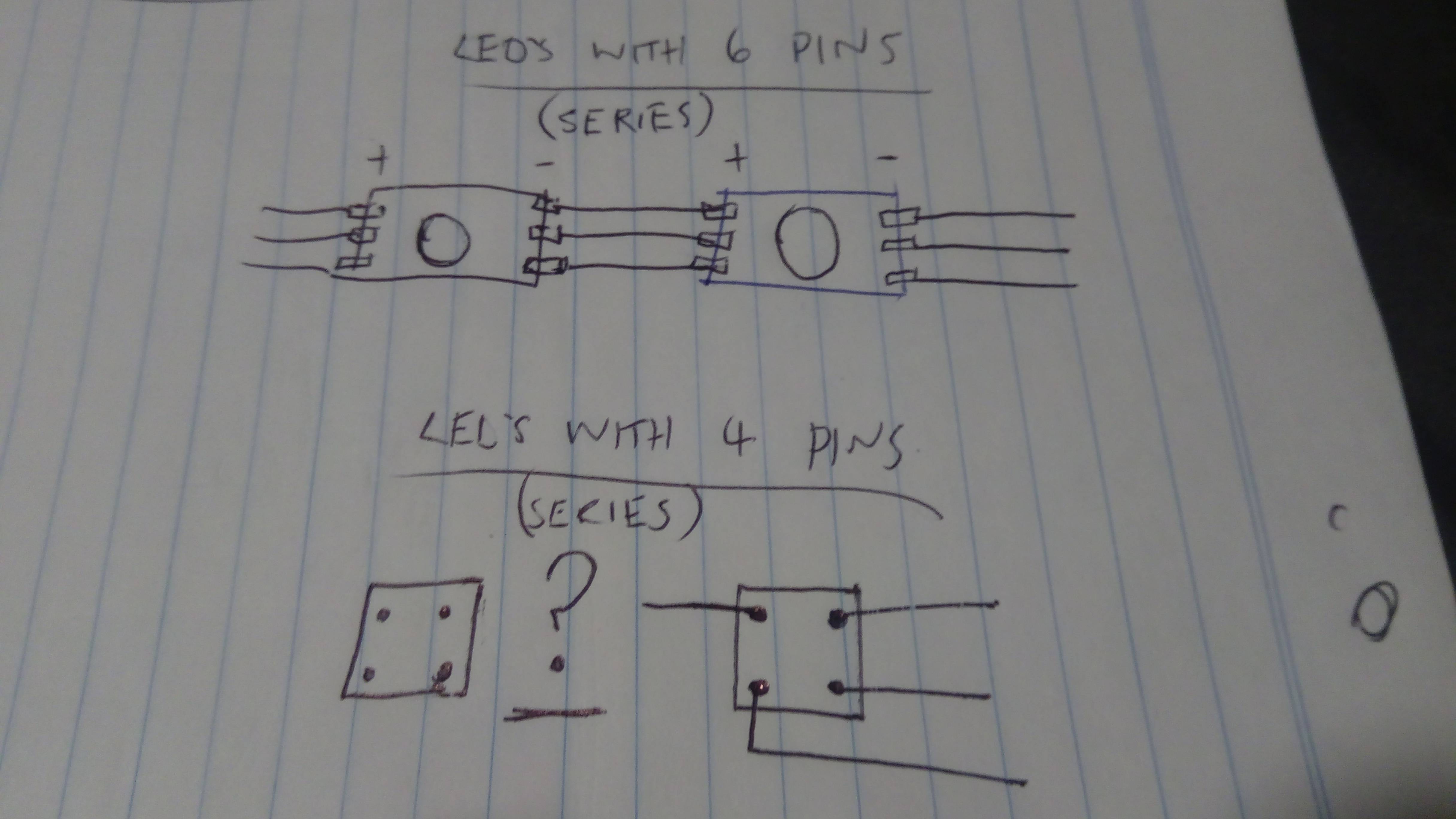 When an led has 6 pins, then I can understand how to achieve series, but with 4 pins, I am lost.

That is because if you have common anode or common cathode LEDs you can not wire them in series, period.

I will have to re-purpose these led's for other projects and get onto ordering some things though aliexpress.