I got a SG92R (from Adafruit) and I am trying to use it with my Arduino Uno R3, and it did not work. This is the guide I followed. I cannot seem to find any information on the SG92Rs.

Learn how to connect and control servo motors with your Arduino board. 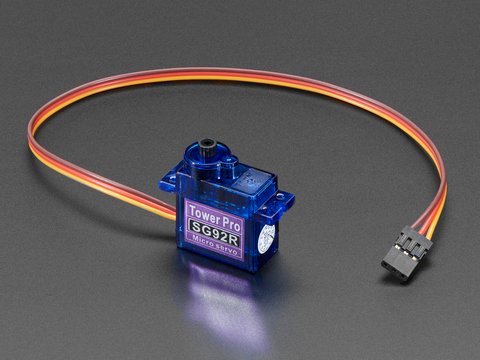 Tiny little servo can rotate approximately 180 degrees (90 in each direction) and works just like the standard kinds you're used to but smaller. You can use any servo code, hardware, or ...

What kind of problem did you encounter?
I think it works with the sample you described.
(There is a few concern that the operating current of the servo may be bit insufficient...)

Please provide the situation in question and your code and circuit.

Nothing happened, and I even tried printing something in the serial at the point before it was supposed to spin and it got through. So I am assuming that the code works.

Bad tutorial. Powering a servo from the Arduino 5V pin is always a bad idea. How is the Arduino itself powered?

Try it with separate power to the servo, something like 4 x AA batteries preferably NiMH rechargeables.

Those little rectangular 9V motors are useless for anything involving servos or other motors. They simply don't have enough power.

USB power for the Arduino is fine. 2 X 2AA holders in series will make 6V which is good for the servo. Connect battery + to servo + and battery - to servo - also to Arduino GND. If that doesn't work then mostly likely you either have the wiring wrong or a bad servo.

You say you have modified the Sweep code to print values to Serial. Please post your modified code here or go back to the standard Sweep code (it's really easy for errors to creep in).

Servo myservo; // create servo object to control a servo
// twelve servo objects can be created on most boards

Sorry about that bad tutorial - nothing to do with us on the forum I'm afraid.

You need a supply capable of a solid 1A or more for the smallest servos, and never
share it with the Arduino 5V rail. Larger and "high-torque" servos need even more current
(which is seldom mentioned in the datasheets for cheap servos - they are hopelessly
poorly documented usually).

Servos are normally designed for 6V to 7.2V, not 5V, so I'd try 4x AA alkaline pack or 5x AA NiMH
pack to power a servo.

Seomthing like 95% of servo issues we see here are inadequate power to the servo(s).

I used this reference and it works fine
#include <Servo_Hardware_PWM.h> INSTEAD OF Servo.h