What is the function of the RX and TX pins on my UNO?

This newbie is a little puzzled by the seemingly regular practice of connecting an nRF24L01 RF PCB to a UNO using the Digital and Power pins on the UNO. I have already posted on the board about the possibility of using the ICSP pinset, but now I notice that Digital Pins 0 and 1 are also labelled RX and TX respectively. It would seem logical that they would have something to do with receiving and transmitting, and that that would mean they should be involved in connecting to the nRF24L01.

Is this just simple newbie ignorance

or am I missing something?

RX and TX are indeed for receiving and transmitting data, Serial UART protocol.
nRF24L01 uses another protocol: SPI, and uses other pins on the Arduino (11 MOSI, 12 MISO, 13 SCK).

Then , RX and TX are not involved in connecting Arduino to the nRF24L01.

We have a case of, "there's no reason for it, it's just protocol!"

I take it that I can forget about using the ICSP pinset for the nRF24L01 - is that right?
As another point of interest, what are the RX and TX pins used for, and are they otherwise available as ordinary digital pins?

The Arduino uses D0 RX and D1 TX to talk to your PC example IDE.

You can use these as regular digital pins but you must be aware these pins are connected to on board hardware and this hardware may prevent the pins from working the way you expect.
Also, if you use these in your projects what you connect to them may prevent you from uploading sketches to the Arduino.

In other words, "Leave them alone unless you are required to use them!"

Is that the general idea?

You can use it if you want to use Bluetooth module connect to Arduino (just example), but you will need to unplug anything plug into that port every time you want to program your Arduino because it will interrupt communication between your Arduino and your computer

Anyway you can use SoftwareSerial instead of use it , It will make your life easier if you don't want to use really fast speed communication

Sorry for my bad English skill , hope you understand

Thanks porama6400 - I'm not using Bluetooth.

Your avatar is creepy.

Vagulus means The Little Wanderer. My avatar is the poor wanderer in need of a little help.

vagulus:
I take it that I can forget about using the ICSP pinset for the nRF24L01 - is that right?

Why? The ICSP pins are SPI synonymous. The set of ICSP on the opposite edge of the board from the USB plug.
The one by the USB plug are different.

INTP:
Why? The ICSP pins are SPI synonymous. The set of ICSP on the opposite edge of the board from the USB plug.
The one by the USB plug are different.

I just set up a UNO as a transmitter (to a proven receiver/responder) using the pins in the attached diagram. Complete failure to connect. Transmission failure on every packet. 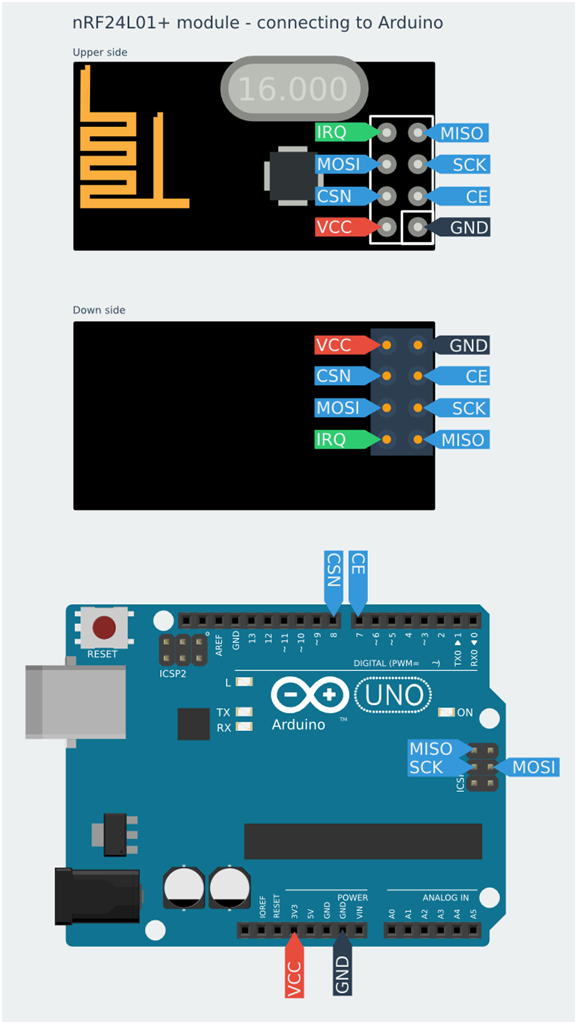