Where to I get the heads for these LED momentary tact switches? 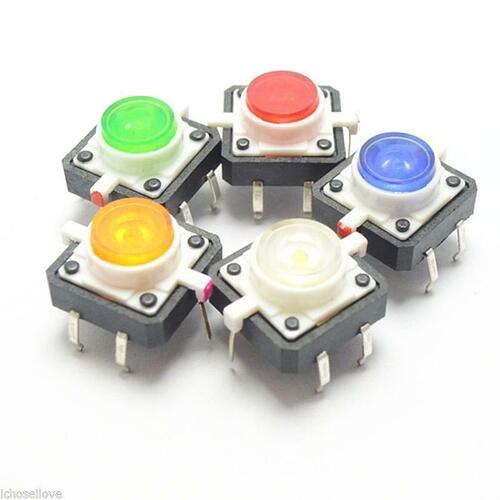 I like these buttons. Without the faces, I am kind of lost. Has anyone seen the actual keys that belong on the faces of these, so I can actually use them on a finished control panel?

Where? I dunno. Perhaps you can find the needle in the illuminated tactile switch haystack. Happy hunting!

I think those are the faces. They're basically just a light-up version of the standard tactile switch. You could make some sort of face for them out of translucent plastic but you'll need to set up your board and enclosure in a way that traps the faces over the buttons or maybe glue it on because you're not going to be able to snap anything over those things. I have seen some other options of LED tactile switches that do have caps.

Ok, so I have to just drill holes that same size in the metal (or plastic) and smash these right up against it. I can make that work.

I felt I already exhausted or saturated my search efforts on eBay, before I posted here. I did not know if anyone saw them sold somewhere else with section for other parts that work with it. I seen a couple of youtube video's where guy spent 20 hours on their 3d printers making their own stuff.

Step #1 Start up 'google' in your web-browser.

Step #4 click on the image that has those same switches you're looking for, which takes you to an aliexpress site.

Step #5 search the first 5 pages until you find suppliers of those switches.

True. But I guess if there's links to the switches, then may be possible to trace manufacturers etc. On the other hand, if they really need the caps, then could just buy the switches and grab the caps off them.

I think they were looking for something like these caps: 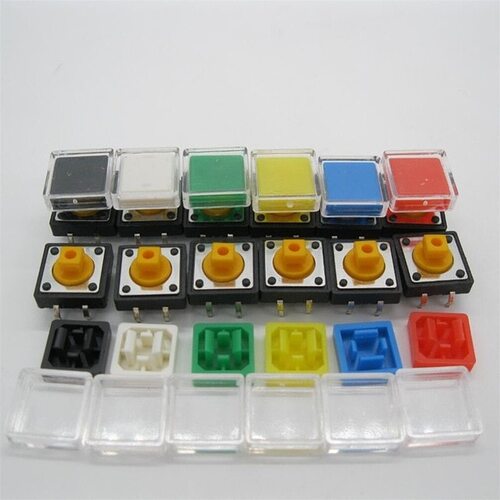 That square button setup looks like what I need to make a project. With the transparent cover, I can print transparent label on laser printer, cut out and actually have words or icons on the buttons.

Are those switches tough to press?

I've bought orders of those from a few different sellers on eBay and Aliexpress and haven't found any noticeable variation. The have about the same feeling as the smaller tactile reset switches on an Arduino board.

To initially clip the cap onto the square shape button you do need to press disturbingly hard but it seems like they can handle it. It might be worth attaching the cap before soldering the switches to a board to avoid the risk of damaging the solder joint or board. Once the caps click on they are really locked on there but the clip does have some play so they kind of rattle around on the switch. If there were holes in an enclosure laterally constraining them that would not be so bad. It hasn't bothered me but subjective "build quality" wasn't a high concern in the projects I've used them on .

I think the caps for the round button (not the cap shape, you can get square or round caps for the square buttons) tactile switches will not require the high initial application force because they don't clip on and I think since they fit tight they won't have any play. They also aren't going to be locked on to the switch but you could glue them if that was desirable. I think the square button style are larger than the round button style.

It looks like you have a large selection of switches but I don't feel like searching through all of them to find the specific caps DocStein99 is looking for. Please post a link to that product page.

Oh no, I can spend my entire night clicking and examining a switch catalog in mouser, digi-key, or anywhere. I ask here to get ideas of what other people have used, to help me narrow down my search. I really like collecting switches for some reason.

I see the tact switches on eBay which is where I got the nice tact led pushbuttons. They are almost useless since there isn't a big enough surface area to protrude out of a panel. These are probably the core switch unit in a larger switch assembly with all the panel mount hardware around it.

I like them because round holes are easier to make than square ones. The caps fit in a 12mm hole and you have 4mm to stick through a panel. They are on a 0.1" grid and the contacts snap into strip board in a secure and satisfying way before you solder them.