Hi
I started a Forum a couple of days ago because my Arduinos did´t work. After asking other people and checking the answers on the forum, I think the problem is the boot loader. I´ve tried loading the ArduinoISP code on examples to my Arduino Uno and then I did the appropriate connections to the Mega, set the Uno to Arduino as ISP and then I clicked on Burn Bootloader. But it gave me an error, (I´ll attach the picture of the error).

They have passed me the link to the Nick Gammon tutorial (Gammon Forum : Electronics : Microprocessors : Atmega bootloader programmer) which I did´t understand well, so I don´t know if you can explain me that tutorial.

The last two lines in the error dialog box are because I clicked on Serial Monitor after I unplugged the Board to see what had happened. 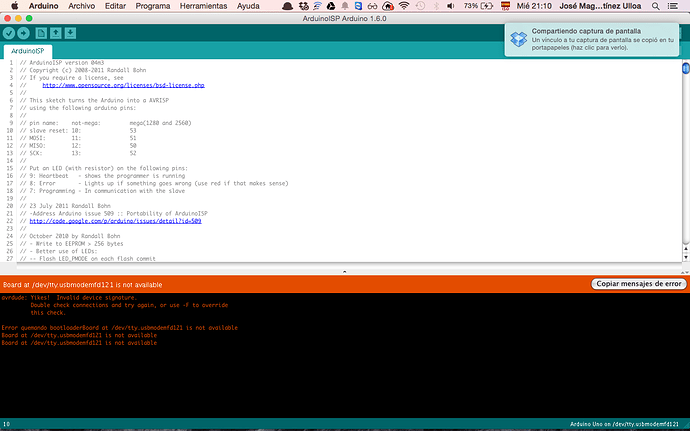 Put a 1 to 10 microfarad capacitor on the UNO between Reset (+) and Ground (-). This will absorb the auto-reset pulse and allow the software to talk to the ArduinoISP sketch.