How would I get higher voltage for analog out?

What is the simplest, cheapest, off-the-shelf component that will allow me to output 0-100% of a separate input?

I initially thought a boost converter would be right, but for some reason those things seem to be made to maintain a specified voltage, say 6v, as long as the input is lower, and above some minimum. The key problem is that I want the output to change as the input changes, as a function of the input.

Most Arduinos don't have an analogue output.

I don't understand what/why you are trying to do.
Leo..

I have another idea. If I took regulated 5v from some other source, and added that to the arduino's analog out? I would need some sort of protection (diodes) so that that additional voltage doesn't feed back into the arduino though. So basically, the analog out of the arduino would now output 5v-10v, since 5v is being added to it, instead of 0-5v. Does that make sense? If so, the next question would be, do I just need a diode on the analog out, or also one on the ground line too?

Which type of Arduino do you own?

You confuse us by not telling what you want to do.
Therefore your posts don't make sense.

I think you want to control a lawnmower with a joystick that needs ~5-7volt.
https://forum.arduino.cc/index.php?topic=353628

Give us the whole picture. Not just your thoughts about how to solve it.

Stick to one thread. You will get the answer in the end.
Leo..

In a way, it doesn't matter.

For the first post in this thread, you would just take the problem for what it is. Just like you would on a test for an electronics course. "Name a device that can map a lower voltage to a higher voltage. Example: 0-5v input to 0-12v output"

For the other post I made in this thread, process is the same. You would just think of it like a test question, "If you added voltage to an analog output to boost its voltage, what would need to be done to protect that circuit from damage?"

I get questions that I would prefer more context on all the time from customers. You just answer the best you can with the information provided and then ask for more info at the end.

How you apply the voltage output will affect the design of the circuit. what is current need for the output voltage?

you can get 0-5v input to 0-12v output by using Op Amp circuit but will be low current.

Did you understand the part that most Arduinos DON't have an analogue output.
They have digital outputs. Switching between 0volt and 5volt.
Nothing in between.

There are several ways to convert PWM into a voltage.
That could well be 0-12volt, or 5-7volt.
You will need external parts for that.
Parts will depend on what you want to do.
Leo..

How much current?
How much voltage?
What frequency?
What accuracy?

If you can answer those, then perhaps there might be a suggestion of a specific component for your specific application.

BillHo:
How you apply the voltage output will affect the design of the circuit. what is current need for the output voltage?

you can get 0-5v input to 0-12v output by using Op Amp circuit but will be low current.

Yep. Low current is fine. I'm just trying to make a stock power-chair controller board think that the joystick is still there even though I've replaced it with with outputs from an arduino.

How much current?
How much voltage?
What frequency?
What accuracy?

If you can answer those, then perhaps there might be a suggestion of a specific component for your specific application.

You want to make the circuit still think the joystick is there, but instead an arduino is translating PWM from an RC receiver into the input expected by the board

Do you know if there's any current flowing through the signal lines? If not, you could generate analog voltage with RC filter, and use that as one end of a voltage divider, and the 12v as the other side. If so, actually, you could do the same thing, but just buffer it with an opamp.

You can do things like that with opamps and resistors and an RC filtered PWM output.

Alternately, you might generate the voltage with a DAC, or using a high voltage digital potentiometer like the MCP41HVxx series (both of these would also need an opamp to buffer the output if it needs to handle more than a miniscule amount of current)

You can use circuit like this, fine turn the R2 to give you 7V

David82:
The joystick uses a hall-effect

Please post a picture of that device, sounds very interresting.

Please post an oscilloscope measurement of that too.
All pulses I know are, pulses because they are not static,
so this seems to be a new concept, I was not aware of.

And 'slight' pulses could be very hard to detect, but much more facile to simulate,
dependig on the meaning of slight in that context.

So there is just a ~0.1v pulse every 50us. The frequency doesn't change. I think it's not anything that needs to be emulated.

The joystick is similar to this one 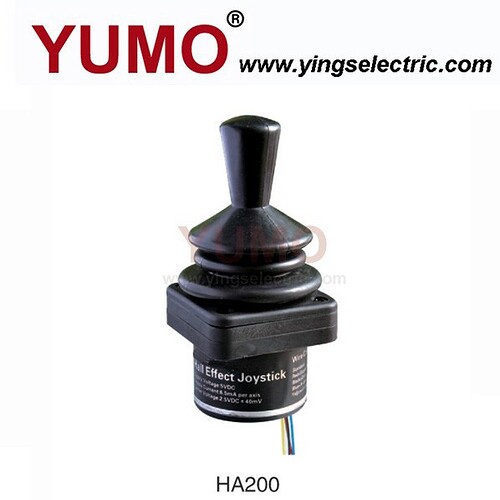 Since it is so tedious and time-consuming to source all of the parts and build, which of these three are more likely to solve the problem?
A:

The stick is nice.

So 'static' reffered to 'constant frequeny of 20kHz' and 'always the same pattern'.
And 'slight' means 1V+-.2V.

Much clearer, thank you.

I think there are 3 pulses, one going up and two down (about half the height).

If you have a link to the datasheet please provide it.

What kind of unit is it attached to?