I am having a hard time getting this circuit to function the way I expected.

The simplified circuit diagram is attached. The switch is really a pin on the Arduino.

When I manually apply 5V (instead of 3.3V) with a power supply the MOSFET "turns on".

Am I understanding the datasheet wrong for this transistor as it seems that only 2.5V should be enough. 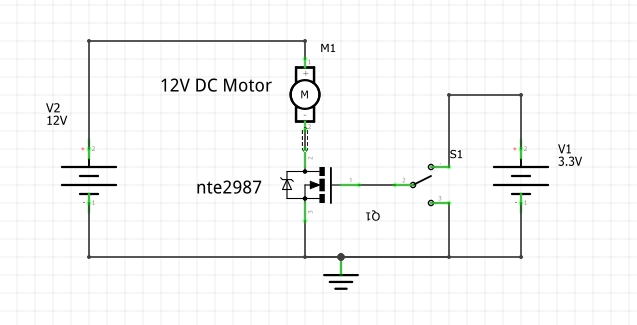 The V_GS(on) is is just the value where the MOSFET just starts to conduct. It will very soon go into saturation region, that is, limit the current by increasing it's resistance according to the V_DS voltage and heat up.

A very important info for a MOSFET is Fig. 1 in this datasheet of another mosfet. It tells you that at 3V V_GS you are in the Ohmic region up to more than 10A. The R_DS(on) resistance is higher than with optimal V_DS, but you are fine in general if you have proper heat management.
I like to use that MOSFET with 3.3V MCUs and loads in the low one digit amp region. Looking at Fig. 1, at 3A, it would dissipate about 300mW, which a TO-220 can easily handle without a dedicated heatsink. At 6A (e.g. a 12V led strip with 72W), we are at 1.2W, which the package could probably still handle, but I would think about a small heatsink. Time to check a data sheet more closely at that point.

Note that I omitted the term "linear region" here. A lot of people use that instead of saturation region, some use it and a lot more beginners understand it as Ohmic region (because U-I is linear there). I try to avoid it. I am writing that here (and whenever I have the opportunity :)) because it confused the hell out of me when I started to work with MOSFETs. See page 4-31.

ElCaron:
The V_GS(on) is is just the value where the MOSFET just starts to conduct. It will very soon go into saturation region, that is, limit the current by increasing it's resistance according to the V_DS voltage and heat up.

Lots of newcomers to MOSFETs mistake the threshold voltage for something else.

The threshold is when the device switches hard off - below that voltage and its essentially OFF.

There is another voltage, the plateau voltage, where the device actually switches from mainly-off
to mainly-on, and this is associated with a lot of charge entering the gate for little change in gate voltage,
forming a plateau in the graph (most datasheets show a typical graph of gate voltage v. charge)

The plateau voltage and size depends a bit on the actual current flowing between drain and source.

To have a MOSFET fully on you want it well above the plateau voltage.

This device is only just on at 5V I think, given the high V(thr), which is why they don't quote Rds(on)
at 4.5V, but only at 5V. There is no typical plateau graph to check against.

I understand now that it just needs a bit more voltage to turn on.

My co-worker suggested just adding a battery temporarily in line with the Arduino pin to boost it from 3.3 Volts to 3.3V + 1.5V = 4.8V which is enough to "turn on" the transistor.

Do any of you have suggestions for a MOSFETs that will be able to turn fully on with only 3.3V besides the IRLZ44NPBF?

It only needs to switch 12Volts.

If they are on Amazon prime that makes it even better.

The current is more important to know.

You could also drive the MOSFET with a BLT from the rail you are switching. Then you wouldn't even need logic level.
Where are you located?

JasonC0x0D:
Do any of you have suggestions for a MOSFETs that will be able to turn fully on with only 3.3V besides the IRLZ44NPBF?

We do parametric search at various electronics suppliers websites to find the latest and greatest
parts - every year there are many 1000's more devices available, and legacy devices often are
more expensive because they are not used in new designs.

MarkT:
We do parametric search

Talking about that, I just did that again and discovered the IRF3708. right now, it seems to be the only TO-220 at Digikey with min R_DS(on) @ 3.3V. And it is available for cheap from Aliexpress.
Looks beautiful. I'll definitively order a pack for supply. Or am I missing something?

Thank you for your help again.

FYI - The pump I will be switching draws 3 Amps at 12 Volts.

Then just look at the V_DS vs. I_D figures in the datasheets. For the IRLZ44N @ 3V V_GS, 3A isn't even on the curve in fig. 1, so there is less than .1V voltage drop across the MOSFET, which means less than 0.1V*3A = 0.4W loss. You are absolutely fine without a heatsink for at least up to 1W with a TO-220. If you want to use another MOSFET, do a similar calculation.