I was thinking that a protoshield with smd pads instead of pth pads would be cool, so I made one. 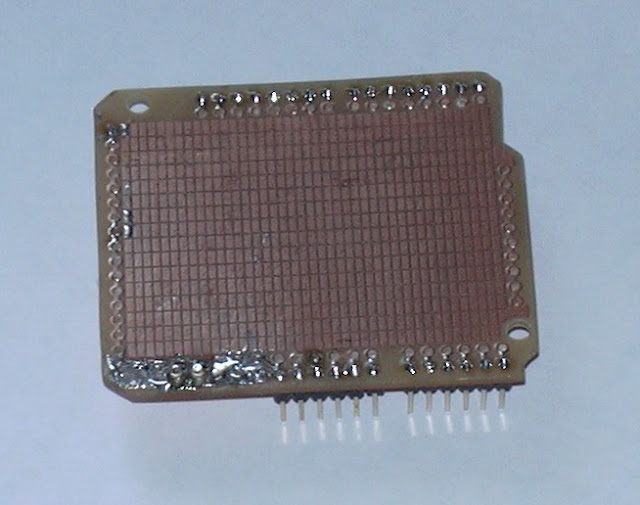 Do any of you think that it is worth producing and selling or would it be better to only give away the pcb files? The board it meant to have as much plain proto-space as possible so it just has a reset switch(I thought I had the size switch I put in the design but I ended up not having it.) a user definable led and power led.

Does the pad size and spacing match any of the SMD packages used for ICs? Or is it only suitable for two terminal components?

Thanks, that would make it useful for discreat analog and digital simple ICs if avalible in that size.

I've stayed away from SMD prototyping so far, but if the board way affordable (say $10 or under) I might be interested in obtaining one.

Nice job, but the soldering around the LEDs looks a little er.. interactive ? ;)

if these were cheap I would totally buy them... as long as you can clean up the solder a bit first XD

How are the headers connected to the pads? Are there traces to the nearest pads, or do you have to bridge to vias or something? Also, what about the bottom side? I think dual-sided could be very useful, provided there were vias or something to the other side available.

I also think if this were sold as a "kit" so to speak - perhaps with a button and a pin-13 led/resistor (and the headers - make them stackable, too - just like other shields) - it could serve not only as a prototyping PCB shield, but a "get your feet wet" SMD tutorial shield as well...

Cr0sh, you mentioned this, but my favorite protoboard of all time has traces to each neighboring hole that you can cut away to build your circuit. It would be really nice if this board had these thin traces too.

Cr0sh, you mentioned this, but my favorite protoboard of all time has traces to each neighboring hole that you can cut away to build your circuit. It would be really nice if this board had these thin traces too.

I know of what boards you are talking about, I think (I've seen them sold by some guy in China on Ebay). Their similar to veroboards and stripboard, but the traces between holes are thinner.

For thru-hole, you can get away with this, but I am not sure you could with an SMD board, unless you obliterated pads - but it would be difficult to do either with the pads so close together on such a board...?

I am just mainly interested in small traces from the headers to the nearest pads. I noticed that there appeared to be jumper holes on the board which may be connected to the headers, but a direct-to-pad trace could be very useful, I would be inclined to think.

Your idea of traces connecting the pads in a grid should be looked into - it might work out (actually, now that I think about it, I think that guy on Ebay had some prototyping SMT boards like this?)...

This first prototype does not have traces between the pads but that is definitely what I am putting in the next version. I like the double sided idea too. The soldering on this was, lets just say interesting. It really needs soldermasking!

This first prototype does not have traces between the pads but that is definitely what I am putting in the next version. I like the double sided idea too. The soldering on this was, lets just say interesting. It really needs soldermasking!

I've never done -any- SMT work, but it has always been something I've wanted to try my hand at.

This was a homebrew PCB. Commercial PCBs are definitely nicer but I like making my own prototype PCBs because I don’t have to wait for the board to get sent to me and it is a lot cheaper than batch PCB and other places.

Double sided is difficult to do on a homebrew PCB because of two main reasons:

Getting things to align right on both sides can be tricky, but doable if you take your time. Transferring of the toner on both sides, though - that can be a little tougher nut to crack. If you can figure out how to align things properly (perhaps with guide holes/marks and a light table?) - then you might be able to "tack down" one side of the artwork, then flip it and "tack down" the other side - then use a heated metal plate and some tongs or tweezers or something to allow you to heat both sides of the board at the same time to affix the toner, then proceed as normal.

This is all speculation, though - I've never made my own PCB before, either, but I have read tons about the process (both toner transfer and UV), and have had some wacky ideas on both for implementation...

Double sided diy boards are hard. You must align both sides… I’ve done them (wii module). I make my boards from ground up. I buy the clad off eBay, clean it, laminate negative film on it, print out artwork on transparency, put artwork and board in my double sided uv led light box, smoke a cig, develop image in a sodium concentrate, drill holes with dremel press, etch in my home made tank with home made etchant (2 parts muriatic acid 1 part hydrogen peroxide). Then I mixed a bowl of drain cleaner and water to lift off the left over film. After that I tin the board with solder. About hr or so later board(s) are done.

As for the board, I don’t SMD solder (because I have no experience), but I may just give it a try with this :P.

Maybe you want a half SMD and half through hole shield :)

Best of both worlds :p

Yea, I did think about half and half, It is not easy to solder headers onto smd pads, that's for sure. :P You don't get much physical strength from them either. I better get working on updating my design!

Check this out, I put it together really fast so it is a really bad design but it has double sided SMT prototyping areas, a PTH area and all the pads are linked with cuttable signals. 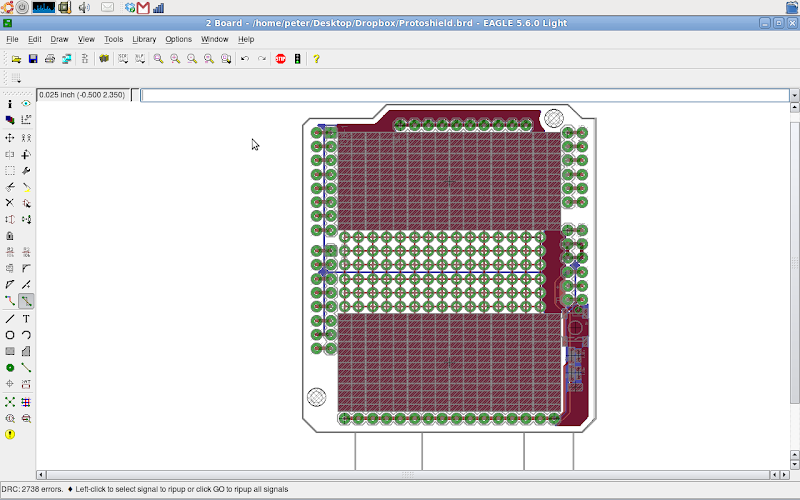 I think cutting a load of connections could be a pain.

How about connections one way only?