The idea is that you could use say your aduino to send serial data out to the module and the convert it to any keypress thus avoiding drivers ect...

so send an ascii serial "0" and then you could send "0" as a nomal usb keyboard keypress.

I'm intending on getting the module made by a development company and its going to cost approx $400. Now i'm happy to get some made "not for profit" and for parts cost only if other people are interested in such a device say $35 each?

Please be assured im not selling anything im just trying to pool resources as I can't really warrant $400 for the dev work and as USB itself with all the driver registration is quite hard I don't think I can do it on my own.

Anyway let me know and if interest is there I can get the work done and then pop a paypal sales page on my site.

I made a few designs about 1.5 years ago that do this, using I2C instead of serial, and they do joystick and mouse input too. There's a single sided PCB, and two double-sided PCBs, one with components on both sides for an extra small layout.

I eventually will make these available, but don't let that stop you...in fact, let me give you a couple hints. USB is a pretty heavy protocol for an ATTiny, and slapping I2C on there just about works. But once in a while, an interrupt will happen at the wrong time and you lose a character. I haven't spent much time trying to fix that yet, but have been considering moving up to an ATmega with a hardware I2C interface, or even a hardware USB interface. Of course that adds to the cost, but not a whole lot.

I'll be interested to see what you end up making! 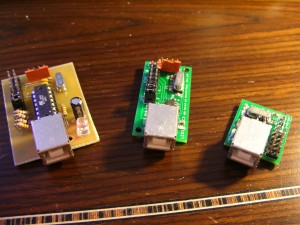 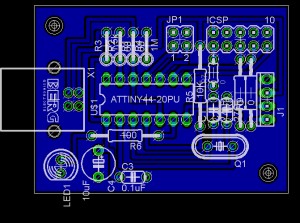 I know it might be heresy on an Arduino forum but rarely this is not the platform you want. What you want is the Create USB interface:-
http://www.create.ucsb.edu/~dano/CUI/
This looks like a HID to the computer and there is an easy way to get it to look like a keyboard or any other USB device.
Thw Arduino works basically as a serial device with a USB to serial converter. Where as this project is actual raw USB. This presents other problems such as drivers at the computer end but looking like a HID most modern computers have these built in.

The devices we’re discussing attach to the Arduino over TTL RS232 or I2C; they don’t use the USB-RS232 converter on the Arduino. They appear as standard HID on any computer that supports USB.

Now i'm happy to get some made "not for profit" and for parts cost only if other people are interested in such a device say $35 each?

FWIW, to me that seems kinda high at first glance (YMMV

I've actually been working on a USB "mini-shield" and integrating the AVRUSB code with the Arduino with some success. I've had it working as a keyboard with one button but haven't pushed it to the limit yet to find out when the timing breaks.

Now that my website's online again I might be able to make some progress and upload the code and schematic. (See: Project Log : Arduino USB - ProjectLogArduinoUSB)