For some time now I have been designing the new WavePro shield for the Arduino. 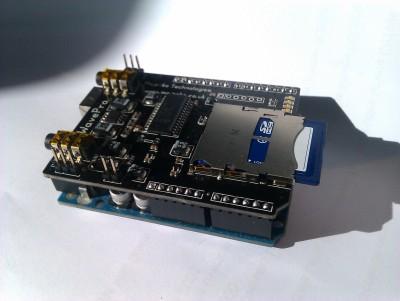 Simply, it is a shield with a dsPIC33FT128GP802 microcontroller on it linked to an SD card.

The firmware on the dsPIC reads WAV files from the SD card, and plays them through its internal audio DAC.

It also has rudimentary recording abilities.

It can play WAV files up to 48KHz 16 bit stereo at a nice high quality.

The project has reached the stage now where I need people "in the field" to test it and feed back to me their ideas and experience with it.

So, I am looking for a couple of willing beta testers to try out a board and experiment with it.

I won't give these out to just anyone though. I am looking for a couple of people who:

If you are interested, please PM me telling me why you think you should be considered for this beta program.

C'mon guys, someone here must want a free high quality WAV playing shield to play with...

Looks like you want a few "professional" testers that specialize in just one area. There might be a few here... But, maybe not...

I am working on an audio project that I could possibly use your shield.

As far as testing, obviously it works, but what are you looking to get out of it being tested? Better quality sound, easy set-up, bugs, etc..?

You don't need to be professional, no.

Just willing to spend some time playing with it and let me know what you think - but most importantly have the ability to upload new versions of the firmware to the dsPIC on the shield. That means you need at least a pickit2 or better hardware programmer.

There should be no need to do any hardware mods, but at this stage who can tell for sure?

And by knowing the WAV format, I mean being able to create and edit WAV files in various formats for testing of the different features and settings. You don't need intimate knowledge of the internals of the file format.

I have a PICKit2 programming still lying around...

and I have played with a few WAV type shields..

(mine and the Adafruit Waveshield)..

Outside of this being PIC based.. how does it differ from the RuggedCiruits Audio board they have out? (curious is all)

Love that it takes the stress off the main Arduino chip though.. (in both projects)

Have you worked up any code examples or libraries for it? I am curious if you can:

1.) layer/mix audio sounds? (ie: having a back ground track playing.. and layer/mix other sounds/samples over it? 2.) SEAMLESS looping?

I can solder just fine... even some SMD stuff..

xl97: Outside of this being PIC based.. how does it differ from the RuggedCiruits Audio board they have out? (curious is all)

Well, that is the main core of the difference really.

The RuggedCircuits one uses the ATxmega32A4. That is an 8 bit chip, just like on the Arduino itself. Yes, it has a DAC on-board the chip, but it's only 12-bit, so unless RC are using an external DAC of some form, even 16-bit WAV files will only play back at 12 bit resolution. The dsPIC, in comparison, is not only a 16 bit controller (with all the associated benefits that come with that), but has a 16 bit sigma-delta (audio) DAC on the chip, so you get the full 16 bit resolution out of 16 bit WAV files. Not only that, the dsPIC has a DSP module in it, so complex filtering and other intensive signal processing can be performed (the firmware doesn't do this yet, but it could).

xl97: Have you worked up any code examples or libraries for it?

The site for the board is at http://sf.net/projects/wavepro and there is a library available there to download. It's a fully open-source project, so you could have a go at building your own - schematics are on the site there.

1.) layer/mix audio sounds? (ie: having a back ground track playing.. and layer/mix other sounds/samples over it?

Again, not at the moment, but as before, it's something that could easily be added to the firmware if people want it, so it may well happen.

I'll drop you a PM to get your details.

I would like to help test it! PM me.

This does sound like an interesting shield. I didn't want you to conclude from lack of (qualified) beta testers that there was no interest. In particular, the 16-bit DAC and DSP features are very useful.

I hope that this shield will be compatible with the Mega in terms of pin allocation (and not blocking pins). If you can do that, and make it switchable 5V 3.3V then it should work with Due too? I mention this because the Due is likely to be more suitable for digital audio projects than the current 8-bit line, and its general pinout is very Arduino Mega2560-like.

The board is aimed at the Uno-style layout. It will be blocking a couple of pins below the normal Uno portion of the mega. The board outline follows the Uno almost exactly, so I would guess that at most maybe 2 pins will be blocked.

The board itself runs of 5V, and has its own 3.3V regulators on-board (separate power supplies for digital and analogue portions). The communication pins on the dsPIC are 5V tolerant, so will run off a 5V or a 3.3V board as long as there is a power supply greater than about 3.6V to run the LDO regulators. As it stands, all the audio processing / IO is performed by the dsPIC chip, so the power of the "host" controller is pretty irrelevant. I may well be adding portions to the firmware to allow playing of audio data direct from the host controller through SPI, however if that is the main usage you want from it, and the host controller is powerful enough, then an I²S codec chip would probably be a better option. This board is aimed at off-loading the audio processing and SD card IO from the host controller on to the audio board, thus freeing up the host controller for more important tasks.

Hello. I was wondering if you still needed testers, I am an audio engineer in Canada and I am involved in a few projects that might need something like this. Please give me an email if you still need help. Elijahlucian@gmail.com

I would love to beta test this. I can program the dspic chip. Thanks again for this awesome work.

Unfortunately I am out of beta boards now. I may be making some more in the near future, so I'll keep you in mind and let you know.

Hi! I am a student of Computer Science at Federal University of Campina Grande. I am interested in testing the prototype WavePro for Digital Signal Processing. Do you still have one available?

I am not looking for any more beta testers for this product at this time.

I'm just awaiting delivery of version 2 boards at the moment. These, when populated (and confirmed they are working), will go out to my existing beta testers. Once they are happy with them I will be almost ready to enter full production.

Just a few issues with the firmware to sort out before I am happy to sell them (I am looking at incorporating a bootloader to make reprogramming easier).

are you willing to leak some information as to what's going into the firmware, ie functionality-wise? will it be more about play / stop / seek type of things? or will it be possible to do a few more basic things without actually getting into PIC programming? (i guess what i'm asking is will (basic) usage of the thing be pretty much comparable to using, say, the waveHC library? or more like a/the audio codec shield? or both?)

mxmx: are you willing to leak some information as to what's going into the firmware, ie functionality-wise? will it be more about play / stop / seek type of things? or will it be possible to do a few more basic things without actually getting into PIC programming? (i guess what i'm asking is will (basic) usage of the thing be pretty much comparable to using, say, the waveHC library? or more like a/the audio codec shield? or both?)

First things first though I want all the core audio functions working flawlessly, then I will add on the raw file access functions.

I am currently looking at ways of providing a bootloader system to make re-programming of the chip simpler, especially for people who don't have access to a PIC programmer. Ideally I'd like to be able to re-flash the firmware from a file on the SD card, but I'm not sure if that's going to be really possible.

thanks for the prompt reply … so play raw data would load the dac? (if i may voice a wish, dedicated functions for setting samplerate and bit-depth would be a neat feature, too.) anyway, will be looking forward to when this is out!