I'm trying to figure out how to get these working properly: 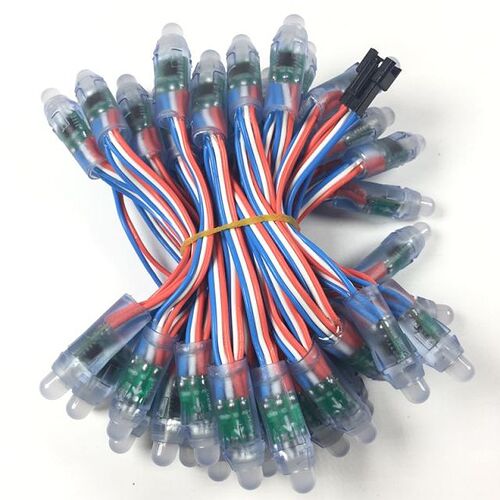 I'm new to this, but this is a string of 50 WS2811 RGB 5MM leds.
For a short while I connected the string to a universal adapter (set on 5v), and they were blinking in bright random colors.

Only when I connected the string to the 5Vin and Gnd pins of the Arduino instead, I got some sensible results according to my code (which is just the code below):

However, the lights are no longer responding to the input pin anymore. If I connect my lights directly to the adapter it will blink shortly in blue sometimes.

My question is, did I break the string somehow or is there something wrong with my setup (it used to work for a while)?
The red wires are the 5v input, the white wires for the signal, blue one is the ground.

It is possible you damaged the first led in the string. Usually you want to put a 100ohm resistor in parallel between the data line and your input pin.

I based this setup on a tutorial. The signal comes in through the white wire (and orange jumper wire), the blue wire is the ground. For a while, the lights suddenly turned on an utterly bright white color, while the last LED on the Arduino end of the string had a slightly dimmer blueish/greenish light. The power supply seems very unstable though (no light, only when I tap the connector). Is this correct? 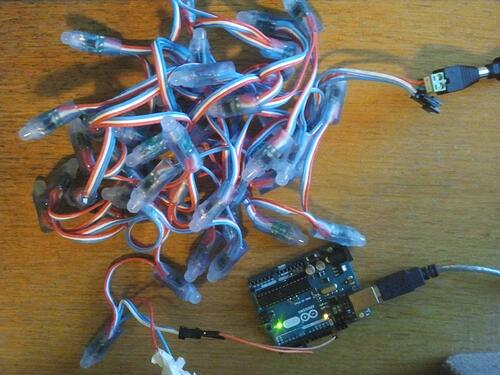 It is hard to tell from that picture. Take a close up of both ends so we can see what is going on clearly.

The power supply might be iffy. Do you have a meter so you can verify 5v?

You may try to cut off the first led and see if that solves the problem. If it does, you should add the series resistor I mentioned before as well as making sure you don't power your arduino with out also powering the lights...