this is the first time I have played around with an ORP sensor, so I may have the wrong end of the stick.

My understanding is essentially: the higher the free chlorine, the greater the oxidation reduction potential and the higher the +ve mV output from the probe.

The results that I have been getting in various solutions are as follows:

In terms of measurement, I am not conditioning the signal at all: just attaching my multimeter leads directly across the output. So far as I can tell there are no electronics within the probe. There are no stray currents in the vicinity that could be affecting the readings.

I understand that ORP is a relative measurement. I am not looking to calibrate, just to understand what is going on and why the measurements I am getting are more or less the inverse of what I would expect!

the Multimeter I am using has 10MOhm input impedance (Mastech MS8268). Ultimately the idea is to automate the monitoring and dosing of a pool. So far I am blindly dosing with 2L of chlorine per day and this seems to keep the pool around 0.5ppm. I've been lucky and so far avoided algae blooms.

Any help and advice gratefully received.

Which ORP sensor and how do you connect it?

By the way, this just sounds wrong: "tap water with 50% chlorine (2.1% sodium Hypochlorite): 140mV" - that's a mere 1:5 dilution of pure bleach, and then your swimming pool water is even higher in chlorine concentration? That would mean anyone taking a dip in your pool comes out looking like an albino.

this is the orp sensor

As for connection, literally just connected with crocodile clips to the sleeve and pin of the sensor.

re your query: i meant 1:1 tap water:bleach and the relevant bleach is household bleach (2.1% Sodium Hypochlorite + surfactants and other stuff ). So 1.05% NACIO in solution (assuming insignificant Cl- in the tap water), c.10,500ppm.

But yes - I agree that the numbers/measurements don't make sense unless somehow I am misunderstanding the nature of ORP probes. Using DRP tabs I estimate the free chlorine in the pool to be around 0.5ppm. 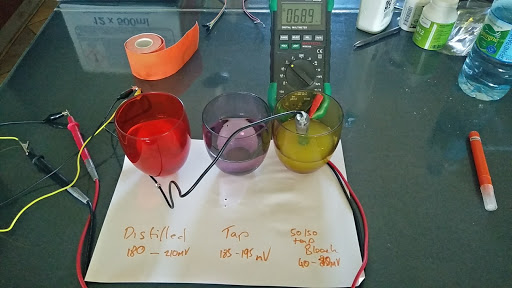 Those sensors are reportedly quite tricky to use and subject to contamination, so read up carefully on how to use them.

I doubt if a multimeter has high enough impedance to make a sensible measurement. Get a standard calibration solution to check.

One place to start is here: Measuring ORP: Top Tips for the Best Data

You may be thinking of pH meters. ORP sensors (by my reading) are not tricky to use. And you can't calibrate them (in the typical sense of the term): all you can do is "check" whether the change in reading is as anticipated between two solutions as different sensors will always read differently.

A checking solution also presupposes that you have some kind of signal conditioning. At the moment I am trying simply to understand the readings with no conditioning at all.

Input impedance of my meter is 10Mohm. I'd think that anything over 10k would be fine for ORP. Ph is different. If not what impedance do you suggest as a minimum and what is the rationale?

I had read the linked document earlier today. Thank you but it was not helpful for this issue.

My working assumption is now that the probe is badly constructed as I cannot see why else the result curve would be inverted.

jremington:
I doubt if a multimeter has high enough impedance to make a sensible measurement. Get a standard calibration solution to check.

Most DMM's are 10M input resistance, you probably want a lot higher than that, since you need to be
several orders of magnitude higher resistance than the water might have. Also any current flowing could
potentially (no pun intended) lead to chemical change on the electrode surfaces. A MOSFET input instrumentation amplifier might be more suitable, with input impedance more like 10^12 ohms.

Also you measure redox potential, water contains many species that affect redox potential, for instance
O2 gas might be an issue. You also need to check for a particular electrode system if it has any incompatibilities with
dissolved species that could affect the reading. Basically you need to be a chemist to understand all
the possible reactions at the electrodes!

I get very similar results with a 100Mohm ADC. So at least one order of magnitude higher.

The ORP probe has an internal resistance in the kOhm range.

Whilst I accept that there are many factors that affect potential generation this in the end is just a battery creating a pd between a reference (probably KCL) and the solution it is submerged in. Chemically this should be consistent and repeatable. And for sure a higher Cl- concentration should result in a materially higher mV than distilled water!

ORP = Oxidation Reduction Potential. Cl- ions are not oxidising or reducing, so shouldn't affect an ORP probe. ClO- (hypochlorite) is a very different ion, and indeed a rather strong oxidiser.

Lots of info also on the web, maybe it can help you find out where your measurements go wrong.
http://www.ozoneapplications.com/info/orp.htm

my mistake. I should have type chlorine bleach rather than just refer to Cl-. Hopefully all the previous posts mentioning Sodium Hypochlorite adequately contextualised.

can you please suggest which MOSFET input instrumentation amplifier, with input impedance 10^12 ohms can be used in orp circuit?

why do you need 10^12? ORP sensors should be readable with a standard multimeter (despite the comments above).

But if you really want a high impedance opamp then LMC6081 should work (10+TeraOhms). That's what I am planning to use in the pH reader I'm building.

my gut feel is that also an LM358 would work. Its input impedance is in the 4GOhm range.

Ultimately the idea is to automate the monitoring and dosing of a pool.

I ve been trying to do the same for some time now both for ORP and Ph but I could never get consistent results from probes. I have tried 3-4 different ones as well and they also come with an instrumentation amplifier for signal conditioning .

do they get consistent results when using buffer / calibration solutions?

do you have a schematic design to share? I hope to finish the first cut of mine later next week.

jpadie:
do they get consistent results when using buffer / calibration solutions?

do you have a schematic design to share? I hope to finish the first cut of mine later next week.

This is one of the probes i tried.

It comes with its own buffer/ amplifier with calibration pots and instructions how to calibrate with it the provided solutions but I was unable to get consistent readings.

No i don't have a schematic for it. I just connected it to a multimeter as well.

Another option which looks more on the industrial side is this.
This is much more expensive as well but I havent tried it.
If you do manage to get anything usable, do let me know as I am on the same track as well!

I'm trying to keep the design at a low price point, for probes too.

I think the ph probes I have been using are £10 each. or less. the ORP probe I bought a few years ago and was much more expensive. No conditioning op-amp provided.

Incidentally I am also designing an arduino control for a variable frequency device to power a standard three phase pool pump. Much much cheaper than buying a variable speed pump

jpadie:
I'm trying to keep the design at a low price point, for probes too.

I think the ph probes I have been using are £10 each. or less. the ORP probe I bought a few years ago and was much more expensive. No conditioning op-amp provided.

Incidentally I am also designing an arduino control for a variable frequency device to power a standard three phase pool pump. Much much cheaper than buying a variable speed pump

Never thought of doing that...

Another option which looks more on the industrial side is this.

Just taken a proper look at these. They appear to be an opamp connect to an tiny85. The ec probe is connected directly to the tiny85. Then they all have some upc at the end that controls the i2c. I'm not sure why that is necessary or desirable when the tiny85 can provide an i2c signal.

Outrageously priced at 60$. Component cost looks like a couple of dollars disregarding the connectors. Not entirely clear where the water temperature is being measured either.

The other issue is that the pH probe doesn't look to have any negative voltage on the opamp. So difficult to see how that's being conditioned to handle the range of values seen from commons probes. Less of an issue for orp since negative readings (technically possible) would be very unusual and in any event you're really looking for above/below a threshold (taking hysteresis into account)

I'd have thought the need for electrical isolation could be circumvented by dropping a ground probe into the water being measured. That's my plan.

jpadie:
I'd have thought the need for electrical isolation could be circumvented by dropping a ground probe into the water being measured. That's my plan.

May work - if your probe is not being biased, as is often done to make pH values > 7 easier to read with a single sided power supply.

I'm biasing with a negative rail.